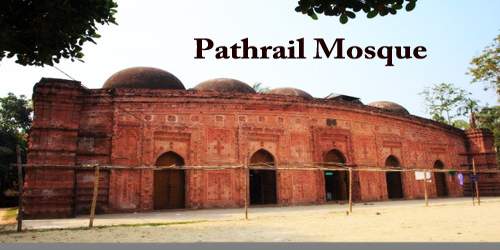 Pathrail Mosque (Bengali: পাতরাইল মসজিদ), presently known as ‘Majlis Aulia Mosque’ and shortly ‘Awlia Mosque’, is located in Bhanga Upazila at Faridpur District. It is 4 km south from Polia which is 8 km east by the Bhanga-Mawa highway from ‘Bhanga Square’ associated with Faridpur-Barishal highway from Faridpur District, Bangladesh. Pathrail Mosque founded by the Sultan of Bengal Ghiyasuddin Azam Shah between 1393 and 1410 (or 1493-1519). Enclosed by a low brick wall the complex, consisting of a mosque and a mazar, is locally ascribed to a great saint Majlis Abdullah Khan, widely known as Majlis Auliya. The mosque, now in utter ruins, is oblong in plan having an outside measurement of 25.60m from north to south and 12.65m from east to west. The four exterior angles of the building are emphasized with octagonal towers, now in a very bad state of preservation. All the towers, rising up to the roof level, are divided into sections by moldings, traces of which are still clearly noticed here and there. The eastern facade of the mosque is pierced with five arched-doorways, while there are two more similar doorways on each of the north and south walls. Inside the mosque the western wall has five semi-circular mihrab niches facing cardinally the five entrances in the eastern facade. All the mihrab sare arched, of which the central one is bigger and shows a rectangular projection towards the back. The battlements and the cornices are curved.

Architectural design of Pathrail Mosque is similar to the ‘Choto Sona Mosque’ and ‘Bagha Mosque’ of Rajshahi and identified the Shahi dynasty by the Department of Archaeology, Bangladesh. The interior of the building is divided into two longitudinal aisles by a row of four brick-built pillars. The cross-wise bays, which correspond to the five eastern entrances and five mihrabs, are five in number. Inside there were ten equal square units, each covered with a dome. The entire domed-roof has completely fallen down. The domes were carried on intersecting arches rising from the pillars and the corners were filled with Bengali pendentives, traces of that are still intact. The mosque was originally embellished with profuse terracotta ornamentation like those in the Tantipada and the bagha mosque. Wall of the mosque is ornamented by rectangular terracotta. Varieties of decorative designs are floral scrolls, rosettes, cusped arch motifs, diaper including hanging patterns. Ancient times, people of this area suffered for drinking water. Pathrail Dighi a big tank dug in the same period for the locality besides the mosque on 32.15 acre land to solve scarce of water and for worship facilities. Graves of famous Majlish Abdullah Khan and Fakir Solimuddin in the south of the mosque. In plan and richness of its ornamentation the mosque is well compared to the Bagha Mosque (1523) in Rajshahi. It is on this stylistic ground the building may be suggested to have been built sometime in the early 16th century during the Husain Shahi period.