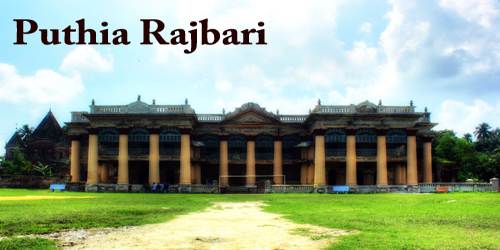 A Visit To A Historical Place/Building (Puthia Rajbari)

Puthia Rajbari (Bengali: পুথিয়া রাজবাড়ী), located at Puthia Upazila in Rajshahi, in Bangladesh, and it is an Indo-European style two-storey palace. The palace was constructed in 1895 by Rani Hemanta Kumari in memory of her mother-in-law Maharani Sarat Sundori Devi. The palace is sited on the Rajshahi Nator highway 30 km from the east of the town and one km south from the Rajshahi Nator highway. It is currently used by Lashkarpur Degree College but is in a poor state of repair. Puthia zamindari created by the Mughals in the early 17th century is one of the oldest estates of Bengal. There is a tradition that Nilambar received the title of Raja from Emperor Jahangir (1605-1627 AD). A partition of the estate took place in 1744 when the eldest son received a 5.5 anna share while the three others received 3.5 anna each. The Puthia Raj estate maintained its existence until the abolition of the zamindari system under the East Pakistan Estate Acquisition Act of 1950. Besides the illustrious two-story Puthia Rajbari, there are 14 other recognized archaeological sites like Baro Shiva Mandir, Chotto Anik Temple, Boro Gobindo Temple, Chotto Gobindo Temple, Jagadhatri Temple, Rath Temple, Keshta Khepar Math and others in Puthia.

Puthia Rajbari is surrounded by ditches. The south end of an open field is where panch ani palace is situated. 4.31 acres of land was used for the Rajbari. The once strong walls surrounding the place are now damaged in places. The rajbari is divided into 4 courts: Kachhari (office) Angan (court), Mandir angan or Gobindabari (temple court), Andar Mahal (inner quarters), and Residence of Maharani Hemanti Kumari. The two-storied Puthia Rajbari, which is the most notable structure in the area faces a four-storeyed large pyramidal dol mancha on the north, across open ground, and presents an imposing 60.96m frontage. It has two symmetrical projected wings at the east and west ends while its central part, about 15.24m wide, accommodates a grand portal. A 3.05m wide verandah runs along the front and provides access to the large halls behind. The balcony roof is supported on three graceful semi-Corinthian fluted columns, rising up to the upper floor. The building’s central portion, between the porticos, continues the columned theme and also has a loggia at first-floor level. Also here the 4 semi Corinthian pillars cover the upper parts of the building. A wooden staircase leads to the upper floor on the east side. There are three rooms of different sizes, two of which were used as treasuries. The other side, (Western) has 4 rooms with two verandahs. Close to Govindabari, there are two small rooms with verandah. Now, most of the rooms built on the east and south of Kachari Angan are in ruins. The northern block of the building with the east-west axis is double-storeyed and has a wide hall of 21.95m x 7.16m. The derelict Puthia palace is now in a state of progressive disintegration.  Puthia Rajbari attracts a large number of local and foreign tourists. The proud palace in Rajshahi has been losing its appearance as an ornamental terracotta piece. The antiques from various structures are decaying or been stolen in the absence of proper care from the archaeological department.