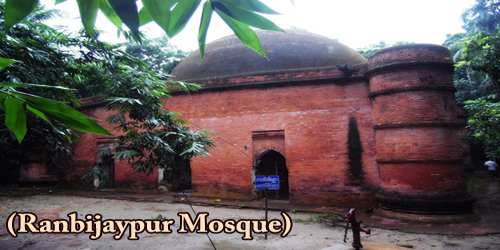 Ranbijaypur Mosque (Bengali: রণবিজয়পুর মসজিদ) is one domed mosque located in Sadar Upazila of Bagerhat district, Bangladesh. This is Bangladesh’s first single dome mosque. Approximately 3.5 km west of headquarters of Bagerhat district and 1.50 km from the Satgumbaj Mosque. Ranbijaypur Mosque is a single domed mosque situated in the Satgumbaj Union village Ranbijaypur. This mosque, also called the Fakirbari Mosque, is one in all the well-protected and best-preserved monuments in Bangladesh, and stylistically dated to the time of Khan Jahan (d 1459 AD). Built of well-burnt brick the mosque consists of an outsized single square hall (inside 10.82m a side) covered over by an outsized hemispherical brick dome. The walls are abnormally thick (2.74m) and are pierced with three two-centered pointed archways three in either side excepting the qibla wall. Traditionally, the main archway at each side is wider than the side ones. There are three semi-circular mihrabs in the qibla wall corresponding to the three entrances in the east wall; the central one is larger than the flanking ones. The central mihrab reveals an external rectangular projection that stretches upward breaking the building’s only curved cornice band but does not rise above the roof.

According to many, the first name of the mosque is Darya Khan Mosque; Darya Khan was the companion of Hazrat Khan Jahan Ali. Ranbijaypur Mosque is home to the biggest dome in Bangladesh. The towers reflecting the building’s four outer angles are circular in Khan Jahani style. They’re slightly molded at their bases and completely plain on the tops. The wide dome, which covers the single square room beneath, rests on four half-domed squinches and four arches springing from the brick pilasters, two inside each wall. The building’s ornamentation, made in terracotta, has largely vanished. The exits, mihrabs, cornice unit, and corner towers are now visible. Jali-work, floral scrolls, lozenges, and hanging patterns are common among the varieties of decorative rosettes motifs. This mosque has the highest dome in Bangladesh (11 meters). The main mihrab encompasses a floral design. The mosque has three entrances on the north, east and south sides and three terracotta ornaments on the walls. a stimulating aspect of the building is that the outside of its dome, which is now plastered smooth, was originally decorated with circular rows of bricks set corner-wise at regular intervals.