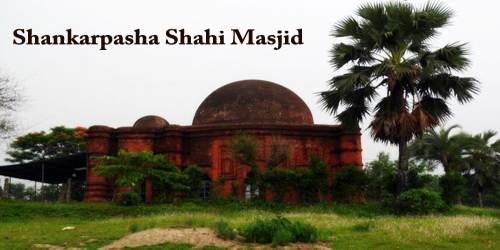 Shankarpasha Shahi Jame Masjid, (Bengali: শংকরপাশা শাহী মসজিদ, Arabic: شاهي مسجد شنكرفاشا‎), a single domed sultanat mosque situated at Shankarpasha in Sadar Upazila of Habiganj district, Bangladesh. It is a square building measuring 21 A9 5 A9 A9 a side with a front veranda 5 A9 4 A9 A9 in breadth. It appears to be built sometime between 1494 and 1499 AD during the reign of Sultan Alauddin Husayn Shah. It was built during the 15th century. It is located in the village of Uchail Shankarpasha, Rajiura Union, Habiganj. It is located in the village of Shankarpasha in Rajiura Union Parishad, very close to Uchail Bazar. The mosque has four octagonal engaged corner towers and two other similar engaged towers each on the north and south walls. As an element of later renovation, the curved battlements have been straightened into horizontal parapets, and the corner towers have been extended beyond the parapet with kalasa (pitcher) motif on the top. The original dome which fell much earlier has later been replaced with a flat-arched roof, supported on iron joists. From engraved inscriptions, it can be found that the mosque was completed in 1208 by Sultan Alauddin Husain Shah’s administrative officer, Majlis Amin. Amin took part in Shah Jalal’s Conquest of Gour and one of the 12 to accompany Syed Nasiruddin’s expedition in Taraf. Amin’s Mazar is located next to the mosque. As years passed, the area became entrapped in dense vegetation and forest land. Recently, this mosque has been discovered again.

The mosque is a one-storey building. The building has the same length and width which is 21ft and 6in. The mosque has three doorways with cusped arches on the east, the middle one being wider and higher than the others. Two other entrances with similar cusped arches provide entry to the front veranda from the north and south sides. On the eastern facade at the ends, there are three panels one above the other, two panels in the same line over the doorways, one large sized panel above two normal-sized ones inline between the doorways. The chain-and-bell motif has developed into a conventionalized floral design suspended from a chain-like branch of the tree. The spandrels show a crisp tree motif with inter-twining branches crowned with rosettes. There are 15 doors and windows, almost equal in size. The thickness of the walls is all roughly 5ft apart from the western wall which is about 10ft. The mihrab of the mosque is profusely decorated. The rectangular frame bordering the mihrab shows decorations consisting of four or eight-petalled flowers within small rectangles framed by the intersection of wavy lines. The brick pillars supporting the cusped arch of the niche are changed into a vertical row of decorations, rosettes alternating with framed four-petalled flowers. There is a large pond behind the mosque. There is a minaret separate from the mosque which is not extremely tall. The mosque still retains its old decorations.