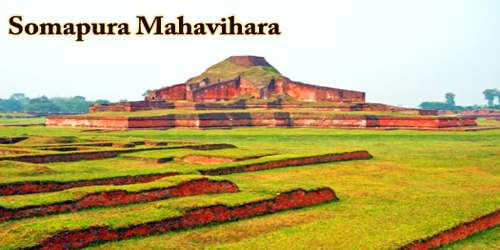 A Visit To A Historical Place/Building (Somapura Mahavihara)

Somapura Mahavihara (Bengali: সোমপুর মহাবিহার “Shompur Môhabihar”), or the Great Monastery, was one of the most famous Buddhist monastic institutions of ancient Bengal; Located in Paharpur, Badalgachhi Upazila, Naogaon District, Bangladesh is among the best known Buddhist viharas in the Indian Subcontinent and is one of the most important archaeological sites in the country. Covering almost 27 acres (11 hectares) of land, it is one of the largest monasteries south of the Himalayas. Through the 17th century, it was an important intellectual center that was occupied alternately by Buddhists, Jains, and Hindus. Clues to its various inhabitants are found on artwork contained within the Somapura Mahavira’s thick outer walls. It is also one of the earliest sites of Bengal, where a significant amount of Hindu statues were found. It was designated as a UNESCO World Heritage Site in 1985. It dates from a similar time period to the nearby Halud Vihara and to the Sitakot Vihara in Nawabganj Upazila of Dinajpur District, Bangladesh.

Evidence of the rise of Mahayana Buddhism in Bengal from the 7th century onwards, “Somapura Mahavira” was a renowned intellectual center until the 12th century. Its layout perfectly adapted to its religious function, this monastery-city represents a unique artistic achievement. With its simple, harmonious lines and its profusion of carved decoration, it influenced Buddhist architecture as far away as Cambodia.

The magnificent main temple dominates the Paharpur site, rising up 22 meters as a cruciform over three terraces. Entering through the central staircase on the north side, you can climb up to the second and third tiers of the temple and explore the different chambers up close. From here, you get a wonderful view of the vast monastery and its 177 monk cells, more stupas, and other archaeological structures.

The monastery is shaped as a square that forms the edges of a quadrangle with the temple in the center. Each side is about six meters thick and contains the rooms the monks would once have lived in 177 of them in total. There are also the remains of other buildings that would have been used for studying and daily life. Built like a fort, the large monastery has only one main gateway to enter, in the middle of the north wall.

The excavated monastic complex at paharpur has been identified with the Somapura Mahavihara built by the second Pala king dharmapala (c 781-821 AD). Some clay seals from the ruins bear the inscription Shri-Somapure-Shri-Dharmapaladeva-Mahavihariyarya-bhiksu-sangghasya. Taranatha and other Tibetan sources mention that devapala built it after his conquest of varendra. Possibly what Dharmapala undertook may have received finishing touches during the reign of his successor Devapala. The Pala rulers were devout Buddhists and they founded a number of monasteries throughout their growing empire. Some of them became great centers of learning and their reputation quickly spread throughout the length and breadth of Asia. Somapura Mahavihara’s close relationship with the ruling dynasty implied that it shared the political ups and downs of its benefactors.

The Paharpur pillar inscription bears the mention of the 5th regnal year of Devapala’s successor Mahendrapala (circa 850–854) along with the name of Bhiksu Ajayagarbha. Taranatha’s Pag Sam Jon Zang records that the monastery was repaired during the reign of Mahipala (circa 995–1043 AD). The Nalanda inscription of Vipulashrimitra records that the monastery was destroyed by fire, which also killed Vipulashrimitra’s ancestor Karunashrimitra, during a conquest by the Vanga army in the 11th century.

About a century later Vipulasrimitra restored the former glory of the Vihara through renovation work and by building a temple of Tara. After the renovation, the magnificence of the temple is alluded by the expression jagatang netraika vishrama bhuh. Many Tibetan monks visited the Somapura between the 9th and 12th centuries. One scholar writes, “The ruins of the temple and monasteries at Pāhāpur do not bear any evident marks of large-scale destruction. The downfall of the establishment, by desertion or destruction, must have been sometime in the midst of the widespread unrest and displacement of population consequent on the Muslim invasion.”

The main central shrine has a cruciform ground plan and a terraced superstructure that rises in three terraces above ground level to a height of about 70 feet. The upper level is a massive rectangular central block which forms the central brick shaft. The intermediate terrace is a wide circumambulatory path which passes four main chapels or mandapas architectural plan, it is in fact a simple cruciform that has been elaborated with a series of projections at the re-entrants, a form that is copied at all levels on the main shrine. At the intermediate level, there were originally two bands of terracotta plaques running around the full perimeter of the shrine, out of which half are still preserved in situ. The ground level today is 3 feet above the original pradakshinapatha or main circumambulatory path, below the base of the lowest band of terracotta plaques.

Within the walls is a courtyard containing the remains of a traditional Buddhist stupa. Evidence of other sacred objects and shrines is found throughout, including the Jain chaturmukhar structure, which displays the artistic and religious influences of the monastery’s three main residential groups: images of Jain deities abound on its main walls, and Buddhist terra-cotta artwork and sacred Hindu sculptures are found on its base walls.

The outer wall of the temple is decorated with ornamental bricks and bands of terracotta plaques which depict fauna, flora, and figurines. At the intermediate level of the temple, about half of the terracotta plaques remain of what would once have been two bands of running around the full perimeter of the shrine, featuring artistic masterpieces combining Buddhist and Hindu influences.

Somapura Mahavira was one of the few Buddhist monasteries to survive the Muslim invasion of South Asia. The historic and cultural value of the immense quadrangular structure was first recognized by the British scholar Buckman Hamilton, who studied its remains in the early 19th century. More than a century later, in 1919, Somapura Mahavira was proclaimed a protected archaeological site, and excavations were begun four years later. Today, Paharpur is the most spectacular and magnificent monument in Bangladesh and the second largest single Buddhist monastery on the south of the Himalayas.