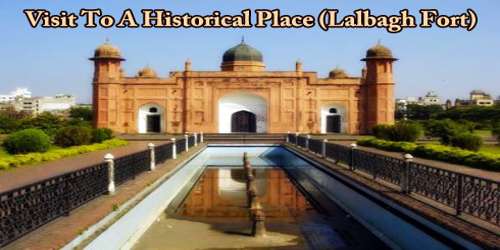 I had been dreaming of visiting a place of historical interest. I learned many things from books about the beauty of ‘Lalbagh Fort’ (also Fort Aurangabad) in Dhaka, the capital of Bangladesh. I got the opportunity when our school/college was closed for summer vacation. On the selected day I got up early in the morning, took my bath and breakfast, and started to join all of my friends who accompanied me and my cousin was with us. We hired a minibus to go there. The 17th-century Mughal fort which stands by the Buriganga River is one of the oldest architecture of Bangladesh. It was built by the then Mughal Subahdar Muhammad Azam Shah, son of Emperor Aurangzeb. It is believed that the construction of the fort was never completed. The fort consists of 3 frameworks – (i) ‘Diwan-I-Aam’ which was the residence of the Governor, (ii) a mosque, and (iii) the tomb of Bibi Pari who was the daughter of Emperor Saista Khan. Lalbagh Fort is surrounded by great walls. There is a grave of shaesta khan’s daughter, Bibi Pari, one mosque, and a common bathing place. This fort is about 2000 feet from east to west and 800 feet from north to south. The gorgeous three-storied main gates is on the southern wall and adorned with Mughal architecture. There is also smaller gates on different walls of the fort. The walls are made of thin red bricks. The beauty of these ancient relics really beggars description. A square-shaped water tank (71.63m on each side) is placed to the east of the Diwan-i-Aam. There are four corner stairs to descend into the tank. There are some tunnels in the fort which are now sealed. It is said that two of the tunnels lead to now ruined Zinzira Fort which was on the other side of the Buriganga River. Another passage was made as a maze. It is claimed that many defeated sepoys (soldiers) of the Sepoy Revolution of 1857 tried to run away through the passage and lost their lives. The British soldiers who chased them to arrest also did not return. To investigate the claim, British researchers sent an elephant and dogs to the tunnel but they did not return either. After that, the tunnels were sealed. At 2 pm. we took our lunch and after a while, we again started to watch the natural beauty of ‘Lalbagh Fort’. Really, it was an enjoyable and memorable day in my life. At 5.0. Pm. we started for our home. It was a very pleasant day.