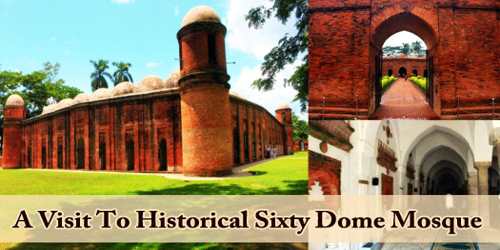 Last year, during the winter vacation, I had a chance to visit the Sixty Dome Mosque (Bengali: ষাট গম্বুজ মসজিদ Shaṭ Gombuj Moshjid; more commonly known as Shait Gambuj Mosque or Saith Gunbad Masjid), in the company of some friends. It is an important historical building (mosque) in Bangladesh. It is part of the Mosque City of Bagerhat, a UNESCO World Heritage Site. It is the largest mosque in Bangladesh from the sultanate period (1204-1576). It was built during the Bengal Sultanate by Ulugh Khan Jahan, the governor of the Sundarbans. It has been described as “one of the most impressive Muslim monuments in the whole of the Indian subcontinent.” It is located in the Bagerhat district in southern Bangladesh which is in Khulna Division. It is about 5 kilometers (3 mi) from the main town of Bagerhat. Bagerhat is nearly 320 km (200 mi) from Dhaka which is the capital of Bangladesh. It was my first visit to this historical monument.

The mosque was built in the 15th century by Khan Jahan Ali, a Muslim Saint of Turkish origin who was a ruler in the area at the time. The thick brick walls of the Sixty Dome Mosque taper to the roofline in the Tughlaq dynasty style of architecture. It is rectangular in shape with eleven arched doorways on the east side, seven doorways each on the north and south sides, and a single door on the west, as well as a circular tower on each corner. The mosque has a total of ten mihrabs indicating the direction of Mecca and is primarily decorated with terracotta. The construction of the mosque was started in 1442 and it was completed in 1459. The mosque was used for prayers, and also as a madrasha and assembly hall. The Mosque has walls of unusually thick, tapered brick in the Tughlaq style and a hut-shaped roofline that anticipates later styles. The length of the mosque is 49 m (160 ft) tall and 33 m (108 ft) wide. There are 77 low domes arranged in seven rows of eleven, and one dome on each corner, bringing the total to 81 domes. There are four towers. Two of the four towers were used to call azaan. The interior is divided into many aisles and bays by slender columns, which culminate in numerous arches that support the roof. The mosque has 77 squat domes with 7 four-sided pitched Bengali domes in the middle row. The vast prayer hall, although provided with 11 arched doorways on east and 7 each on north and south for ventilation and light, presents a dark and somber appearance inside. It is divided into 7 longitudinal aisles and 11 deep bays by a forest of 60 slender stone columns, from which springs rows of endless arches, supporting the domes. 1.8 m (6 ft) thick, slightly tapering walls and hollow and round, almost detached corner towers, resembling the bastions of fortress, each capped by small rounded cupolas, recall the Tughlaq architecture of Delhi. The mosque represents wonderful archeological beauty which was the signature in the 15th century. The Sixty Dome Mosque was originally surrounded by protective walls with two gates, but only the magnificently arched eastern gate remains, giving some indication of the magnitude of the walls when they were intact. Although time and the elements have taken their toll on this magnificent structure, it is nonetheless worth visiting when exploring the fascinating country of Bangladesh.