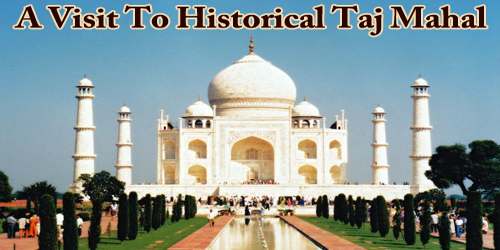 A Visit To Historical Taj Mahal

India is not only culturally rich but historically the country entails a long story of its richness. It has a glorious history with ancient times. There are many tragic incidents in the history of India, which are described in the historical places of India today. There is no shortage of historical places in India. To see these sights, not only people from this country but also foreign tourists come every year.

Last year, during the winter vacation, I had a chance to visit the Taj Mahal, in the company of my uncle. It is an important historical building.

The Taj Mahal stands on the south bank of the Jamuna at Agra. It was built by the Mughal Emperor Shah Jahan in memory of his beloved wife, Mumtaz Mahal. It took twenty thousand workmen, twenty-two years to complete the building.

It is calculated among the seven wonders of the world. With the Taj Mahal, the romantic side of Mughal emperor Shah Jahan is attached. Shah Jahan constructed this in memory of his Begum Mumtaz Mahal. Thousands of artisans have cooperated with their talents for years. In fact, the diligence carried out in the construction of the Taj Mahal for years has been clearly visible even today. Looking at the Taj Mahal located in the Agra city of Uttar Pradesh, presently it’s construction is not easy to imagine. It is a scenic spot as well as an architectural model from the historic point of view.

The Taj Mahal is made of pure white marble. It has four minarets at each end and a big dome at the center. The main building stands over a basement in a rectangular shape. The remains of Shah Jahan and Mumtaz Mahal lie buried under it. There is a park in front of it. The fountains and multi-colored flowers add to the beauty of the palace.

Taj Mahal is located on the right bank of Yamuna River and south of Agra city. Taj Mahal is the world’s most beautiful building. This entire building is made of white marble. The construction work of this monument, symbolized by the lush green gardens on the right side of the Yamuna, was started in 1631, which was completed in 1653. The Taj Mahal is built on the design traditions of Persian and earlier Mughal architecture. Mainly the inspiration came from successful Timurid and Mughal buildings including the Gur-e Amir (the tomb of Timur, the progenitor of the Mughal dynasty, in Samarkand), Humayun’s Tomb, Itmad-Ud-Daulah’s Tomb (sometimes called the Baby Taj), and Shah Jahan’s own Jama Masjid in Delhi. Earlier Mughal buildings were primarily constructed of red sandstone. Shah Jahan preferred the use of white marble with semi-precious stones. Buildings under his encouragement reached new levels of refinement. The materials used to make this monument, are derived from various sources. Mainly White stones were brought from Nagrar based Makrana and red stones were recommended from Dhaulpur and Fatehpur Sikri. Yellow and black stones were erected from Nirbad and Charakoh. Some precious stones and gold and silver items were procured from some prominent emperors and from abroad. Some goods were also imported from far-flung areas. There is different opinion among historians about the cost incurred on the construction of the Taj Mahal. Some historians say that Rs 3 crore was spent in the construction of the Taj Mahal at that time.

The Taj Mahal looks wonderful in the crimson rays of the setting sun. It attracts a large number of visitors every day from home and abroad. On a full moonlight, the Taj Mahal looks very grand and magnificent. Its beauty surpasses all description. The visitors watch with wonder and admiration of the grandeur of the building. They drink deep into its beauty.

Each historical site has its own importance. The significance of the Taj Mahal is in its architectural craft and beauty, which has made it unique. In addition, the love of Shah Jahan has made a successful attempt to infuse life in this beautiful building. By seeing the Taj Mahal, the lovers themselves sing songs of love. That’s why this is my favorite historical place. Whenever I shall get the opportunity, I feel happy to be with the beauty of the Taj Mahal again.