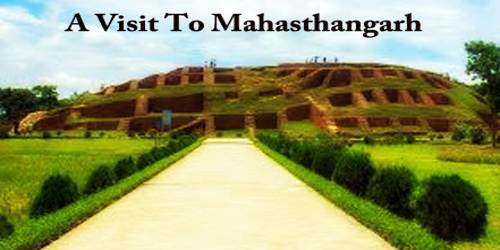 A Visit To Mahasthangarh

Bangladesh has many historical places, though it is a small country. I visited only some of these eye-catching places. Mahasthangarh is one of the famous historical places in Bangladesh. Last year I got an opportunity to visit Mahasthangarh in Bogra, with some of my friend’s. It is well known for a famous Buddhist monastery. Mahasthan means a place that has excellent sanctity and garh means fort. Mahasthan was first mentioned in a Sanskrit text of the 13th century entitled Vallalcharita. It is also mentioned in an anonymous text Karatoya mahatmya, circumstantially placed in 12th-13th century. The same text also mentions two more names to mean the same place at Pundrakshetra, land of the Pundras, and Pundranagara, city of the Pundras. In 1685, an administrative decree mentioned the place as Mastangarh, a mixture of Sanskrit and Persian meaning fortified place of an auspicious personage. Subsequent discoveries have confirmed that the earlier name was Pundranagara or Paundravardhanapura, and that the present name of Mahasthangarh is of later origin. It stands on the western bank of the Korotoa. It is a few kilometers away from Bogra town. When we reached Mahasthangarh, a glorious part of our past civilization opened up before our eyes. It was a very developed city. It was about 2000 meters long and 1500 meters wide. This city was fenced around by a wall. We entered into the monastery and saw some elevated places that soothed our eyes. I was impressed to see the natural sights. These elevated places are known as ‘Vitas’, ‘Kundas’, ‘Gous’ and ‘Dhaps’. After that we visited the ghat of Kankabati near the elevated places and then the mazar of Shah Sultan Balkhi Mahi Sawar. This impressed me about the religious harmony of our past civilization. Then we went to the museum at Mahasthangarh. The relics of the past have been kept in the museum. We saw some images, dice, ornaments and pots there. These relics reminded us of our rich old history. I became astonished to learn about our rich culture and heritage.