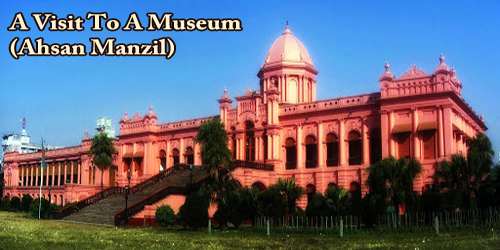 A Visit To A Museum (Ahsan Manzil)

After our examination had been over, I along with some of my classmates planned to visit any museum. Then we informed our class teacher, Mr./Mrs. XYZ (Name) of our plan and program. He/she agreed to go with us. We decided to visit Ahsan Manzil. We collected Tk. 5000 from our class. Our school/college also contributed to Tk. 5000 to arrange a visit to the museum. We hired a special bus from our institution to Ahsan Manzil. At the appointed time all of our classmates got in the service. Our class teacher was also punctual. He/she took his seat. Then the driver started for Ahsan Manzil. It took only one hour for us to reach our destination. The building (Ahsan Manzil) is situated at Kumartoli along the banks of the Buriganga River in Dhaka, Bangladesh. Construction was started in 1859 and was completed in 1872. It was constructed in the Indo-Saracenic Revival architecture. We bought 50 tickets to enter the museum. Its ground is full of green grass. There are plants and trees all around the museum. We heaved a sigh of relief and took fresh air heart fully. Its ground is also enriched with flower and foliage and we had a heavenly bliss. Some 16 years after the palace’s construction, it was damaged by a tornado, then altered during restoration, becoming even grander than before. Recognizing the historical and architectural importance of the Ahsan Manzil, the government of Bangladesh took the initiative to renovate it. In 1985, Ahsan Manzil and its surroundings were acquired. After the completion of the renovation work in 1992 under the supervision of the Directorate of Public Works and Architecture, it was brought under the control of Bangladesh National Museum (20 September 1992). A museum has been established there. Afterward we entered the museum. We saw ancient relics there. We observed pistol, rifles, arrow, bow, spear, helmet, ax, and sword, and so on. We also saw the carpet, flower vase, paintings, and many other things. But the thing that I liked most was the throne. It seemed it was covered with gold as it was glittering. I felt like touching it. After we had visited it, we came back to our respective destination safe and sound.