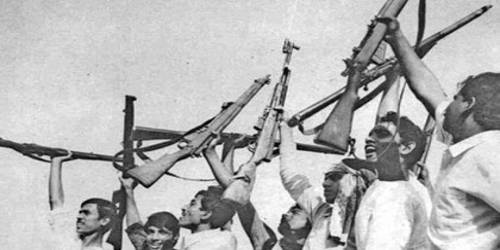 The Bangladesh Liberation War was an armed and bloody struggle pitting East Pakistan and India against West Pakistan. It took place in 1971. The war was fought against the Pakistan army in 1971. The war resulted in the secession of East Pakistan, which became the independent nation of Bangladesh. On March 25, the army launched a massive attack in which there were heavy casualties. Bangabandhu Sheikh Mujib was arrested and flown to West Pakistan. Before that, he declared the independence of Bangladesh. An entire people of 70 million, inspired by their great leader Bangabandhu Sheikh Mujibur Rahman, rose in arms against the military junta of Pakistan when years of political persuasion failed to secure for the Bengalees a place of honor and justice in that country. He said, “The struggle this time is for emancipation! The struggle this time is for independence!”  Most of the Awami League leaders fled and set up a government-in-exile in Calcutta, declaring Bangladesh an independent state. They inspired people to fight for the motherland. Common people of Bengal went to the battlefield with the dream of having a free motherland. Internal resistance was mobilized by some Bengali units of the regular army, notably by Major Zia ur-Rahman. During the war, Bangladesh gained the support of India, which provided economic, military and diplomatic support to the ‘Mukti Bahini’ i.e the freedom fighters. Eventually, on Dec. 3, 1971, the Indian army invaded the territory of its neighbor. The Pakistani army surrendered on December 16. Many common people, with the help of the Indian government, fought against them. They fought for Liberation. They fought for nine-month and after nine-month, we gained our liberation. Bangabandhu Sheikh Mujibur Rahman was released from jail and returned to a hero’s welcome, assuming leadership of the new Bangladesh government in January 1972.

The war of independence was a hard-earned one. It was also a war of supreme sacrifice. People sacrificed their lives, women gave up their honor and after a long-fought 9 months, the sun of freedom rose. About three million people died in this war, Most of them died in the genocide carried out by the Pakistani army. Today, we celebrate our independence pompously. The government arranges March’s past show on Independence Day. The TV channels telecast special programs and newspapers publish special supplementary on this gala day. The roads are decorated with flags; colorful papers and posters. The buildings are illuminated magnificently as well. On Independence Day, we cherish our glorious past with solemnity. Now we are a free nation. We remember the freedom fighter with great respect. We should not let this great achievement go in vain.