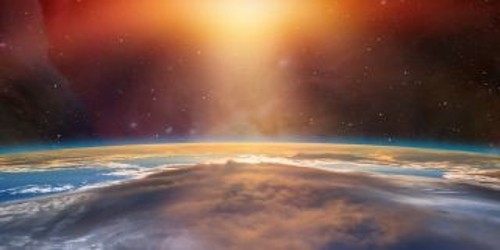 We Should be concerned about Greenhouse Effect – an Open Speech

We Should be concerned about Greenhouse Effect – an Open Speech

Climate change refers to significant, long-term changes in the global climate. First, what is this effect? Ever since the Industrial Revolution began in the 18th Century smoke from fossil fuels, oil, natural gas and especially coal had deposited carbon dioxide in the lower part of the earth’s upper atmosphere. The effect of this had been that part of the energy of the sun’s rays reflected from the earth’s surface had been absorbed by the C02 and by water vapor and returned to the earth in the form of heat. Thud the atmosphere is behaving increasingly like a greenhouse. The glass allows the sunlight through but traps the heat. The consequence is what is called ‘global warming’. It is this systemic connectedness that makes global climate change so important and so complicated.

There is a school of thought which says that the result will be a change in the earth’s climate, plus an increase in nitrous oxide, methane gad, and FREONS. It is predicted that by the mid 21st Century average temperatures will rise by 5 degrees C (9 degrees F). This will result in the melting of glaciers and polar ice-caps. Coastal waters will ride and inundate many low-lying countries. Food production for an increasing world population will be put at risk.

Not everyone, of course, accepts this scenario, though the quantity of CO2 in the lower upper-atmosphere is constantly monitored, and the fact that the level is increasing is not disputed. Whether or not the expected ride in average temperature will happen is another matter. There have been no significant climatic changed for centuries, indeed millennia and, the opponents of the doom-merchants argue, nature has it’d own methods of damage-limitation and self-adjustment. Moreover, there are no present signs of global warming. The weather pattern in Britain, for example, is much the dame ad it was in Victorian days, or Roman days for that matter. Why should it suddenly change? Coal had always been burnt and before coal, wood, and charcoal. Forest fired have always raged. Volcanoes and explosions such as ad Krakatoa (1883) have always thrown tons of noxious gases into the atmosphere. After that particular explosion, a cloud of dust and gas drifted over Europe and darkened the sun for six months – before dispersing naturally. A tidal wave drowned 36,000 in the Java-Sumatra area. Nature’s self-damage greatly exceeds any possible human contribution.

The fact is, however, that many people do take the ‘greenhouse’ threat seriously, and there is a cross-section of people in most industrialized countries who lobby continuously against the continued use of fossil fuels. Whether they are right, or merely alarmist, only time will tell. However, the fact that CO2 is on the increase is undisputed. Further, it cannot be disputed that the greenhouse effect is a possibility, even if remote. Nuclear war is also a possibility, though remote, every possible step is taken by democratic countries to ensure that it will not happen.

The problem is that many countries are geared to fossil rather than nuclear power sources. Supplies of coal, and probably of oil and natural gas, are virtually unlimited. In Britain, most pits have closed down, causing widespread unemployment and much consequent human suffering. The coal lobby argues for emission cleansing and a compromise, both economic and environmental, may be possible. It would be cheaper, they argue than to transfer entirely to nuclear power, whose installations may, in any event, cause health hazards and even the occasional disaster.

One optimistic sign is that proponents of all power sources agree that every generation has an obligation to preserve rather than exploit and pollute the planer. The worst culprits in the C02 saga are the old-fashioned heavy industry plants, such as those in the Ruhr, East Germany, and what was the Soviet Union, and the fossil-fuel-fired electricity generating stations. Much of the old industrial plant has now been either modernized or superseded, and some countries such as France have moved over almost entirely to nuclear power. That, in my opinion, is the way forward.

I do not believe that in any event, the greenhouse effect would have the dire consequences which have been predicted. Yet it is a risk which we should not take. Modern technology has outgrown the use of fossil fuels, and apart from any possible dangers to future generations, the kind of world to which we commit them should be a clean, wholesome and beautiful world, as the Creator intended.