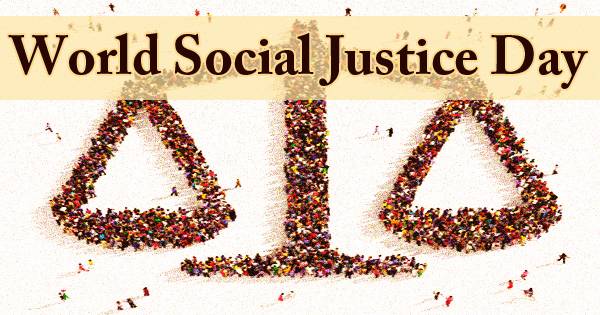 World Social Justice Day is an international day, also known as “Social Justice Equality Day” because it is a worldwide celebration and not a public holiday. On February 20, the United Nations (UN) World Day of Social Justice is observed annually to inspire people to look at how social justice impacts the eradication of poverty. It also focuses on the goal of achieving full employment and social inclusion support. Social justice is considered by the UN as the basic concept of peaceful and prosperous coexistence between nations. The primary agenda behind the “World Day of Social Justice” is to foster global peace and harmony, prosperity, and social justice by resolving issues such as poverty, unemployment, illiteracy, migrant problems and abuses of human rights, etc. Social justice is an overarching concept inside and between nations for peaceful and successful coexistence. When we support gender equality or the rights of aboriginal people and refugees, we uphold the values of social justice. When we eliminate challenges that people face because of gender, age, race, ethnicity, faith, culture, or disability, we advance social justice. Many organizations make comments about the importance of social justice for individuals, including the UN, the American Library Association (ALA), and the International Labor Organization. By fighting poverty, social and economic exclusion, and unemployment, several organizations often present proposals for greater social justice. The promotion of social justice for all is at the heart of our global mission to foster development and human dignity for the United Nations. The adoption of the Declaration on Social Justice for a Sustainable Globalization by the International Labor Organization is only one recent indication of the dedication of the UN system to social justice. Through employment, social security, social dialogue, and basic values and rights, the Declaration focus on achieving equal results for everyone.

Several bodies, including the United Nations and the International Labor Agency, make comments on the importance of social justice for individuals. By fighting poverty, social and economic exclusion, and unemployment, several organizations often present proposals for greater social justice. In order to mark the day, labor unions and advocacy organizations are invited to call on their members and supporters. Schools, colleges, and universities may organize special day-to-day activities or schedule weekly events on the subject of poverty, social and economic exclusion, or unemployment. Throughout the World Day of Social Justice, various media, including radio and television stations, newspapers, and internet sites, can offer attention to the issues. The celebration of the World Day of Social Justice brings together the international community in an attempt to foster global peace and equality. It makes the world’s political thinkers and politicians admire the fact that the global ambitions of sustainable development can only be accomplished by the implementation of social justice. Social justice is a central concept that guarantees growth, stability, fair distribution of income, equal opportunities, and also prevents any discrimination based on age, ethnicity, creed, faith, gender, or physical differences. It is hoped that the ties between the illicit trade in diamonds and armed conflicts, especially in Africa, and the importance of the International Criminal Court will be given special coverage. It is an independent court that carries out proceedings against persons charged with genocide, crimes against humanity, and war crimes. Ideal subjects include (but are not limited to) childhood poverty, global citizenship, human rights, and sustainable development for educating students about the need for social justice. With the United Nations (UN) and other services, a range of lessons are available by region.