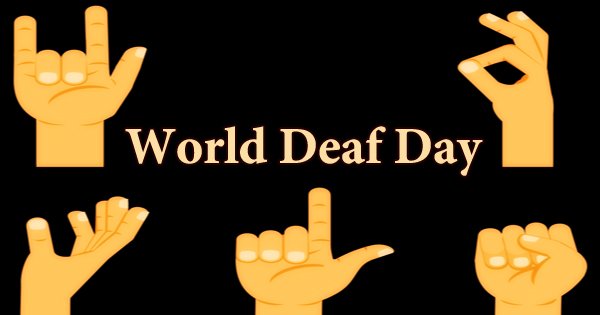 People must take part in commemorating “World Deaf Day” not only as a “Deaf Day,” but also as an opportunity to extend the path of growth and development through new technologies and to provide deaf people with a wide range of lifestyle options. Every year in the last week (last Sunday) of September, World Deaf Day is commemorated to draw the attention of the general public, politicians, and development agencies to the accomplishments of deaf people and the deaf community. The world’s deaf population is estimated to be around 70 million people. According to one estimate, developed countries house more than 80% of the world’s deaf population. People who have died have gone through a lot of their lives. When governments or society fail to provide legal support or security, their problems become even worse. It’s difficult to generalize the difficulties that deaf people face. The World Federation of the Deaf (WFD) organizes World Deaf Day every year. The goal of the observation is to promote deaf people’s human rights around the world. WFD works in close coordination with the United Nation and other agencies like International Labor Organization (ILO) and World Health Organization (WHO) to support the deaf. The World Federation of the Deaf (WFD) established the World Day of the Deaf in 1958. They commemorate the first World Congress of the World Federation of the Deaf, which took place in September 1951, during the International Week of the Deaf in the last week of September. The day of awareness was later extended to a full week, and it was first held in Rome, Italy, as the International Week of the Deaf (IWD). Since then, the worldwide deaf community has commemorated it every year. The International Week of the Deaf takes place during the last week of September, the same month as the WFD’s first World Congress.

Throughout the commemoration of the event, all deaf people’s organizations around the world are strongly urged to meet the demands and needs of deaf people while also expanding their rights around the world. From September 20 to 26, the World Federation of the Deaf (WFD), which is recognized by the United Nations as their spokes-organization, will commemorate International Week of the Deaf. On September 26, the International Day of the Deaf will be observed. Individuals and national associations of the Deaf organize celebrations all over the world. The World Federation of the Deaf is a non-governmental international organization of Deaf national associations that is acknowledged by the United Nations (UN) as their spokes-organization for promoting Deaf people’s human rights. The World Federation of the Deaf (WFD) is made up of 130 national deaf associations from around the world, representing nearly 70 million deaf people. WFD has always placed a strong emphasis on “equality, human rights, and respect for all people, regardless of race, ethnicity, religion, gender, sexual orientation, age, or any other distinction.” WFD collaborates closely with the UN and its various agencies for the benefit of deaf people, in accordance with the principles and aims of the UN Charter, the Universal Declaration of Human Rights, and other UN and focused agency wide acts and recommendations.

Objectives of the World Deaf Day –

To promote the human rights of deaf people, including equal access to education and modern technology. Campaigns and workshops are held to raise awareness about the reasons, causes, kinds, signs, and symptoms of deafness or hearing loss. People also honor deaf people’s accomplishments by honoring them at public events. Sign languages are full-fledged natural languages that are structurally different from spoken languages. Deaf people use international sign language in international gatherings as well as informally while traveling and socializing. It is a pidgin form of sign language with a limited lexicon and is not as complex as natural sign languages.