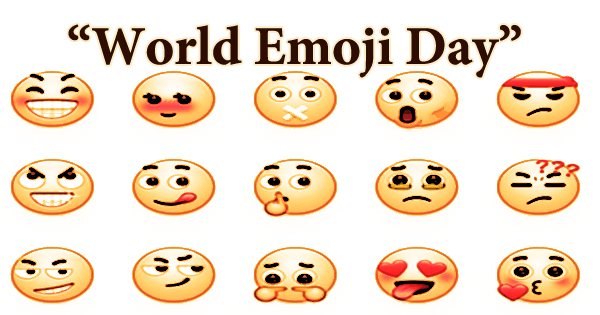 Emoji is the fastest-growing language in history; we use emoji on Facebook, Twitter, and other social media platforms every day. “World Emoji Day” is an annual unofficial holiday held on July 17th to honor and celebrate emoji; in the years since its inception, it has become a popular date for emoji-related product launches and releases. The day is commemorated to symbolize an idea or sentiment through the use of technology. Emoji is a small digital icon that is getting increasingly popular these days and is, without a question, an important element of our conversations. We use emoticons to communicate ourselves when we are feeling lazy or when we are at a loss for words. There are now emoticons for every emotion. Emojis have progressed through the years. It not only reflects basic human emotions, but it also goes beyond that. The computer code that gives us emojis is created by the business Unicode, but Emojipedia is where users can learn exactly what each emoji signifies and how to apply it. The most common emojis, such as the traditional smiley face, heart, or happy face with tears of laughter, are certainly familiar to and used by most of us. According to CNBC, “Jeremy Burge, the London-based founder of Emojipedia, founded World Emoji Day” in 2014. Burge produced this on July 17th, according to the New York Times, “based on the way the calendar emoji is displayed on iPhones.” “There were no official plans put in place” other than designating the date for the first “World Emoji Day,” Burge told The Independent. In 2018, the Washington Post recommended that readers utilize this day to “communicate with the only emoji.”

Shigetaka Kurita, an engineer of Japanese mobile provider NTT Docomo, invented the first emoji in 1999. In February 1999, he produces 176 emojis for the launch of NTT DoCoMo’s integrated mobile internet service “i-mode,” which debuted in Japan. The service was limited to 250 characters, posing a challenge for Kurita to come up with a way to communicate in a concise but evocative manner. Apple included an emoji keyboard in the original iPhone when it was released in 2007 in order to capture the Japanese market. Despite the fact that it was not meant for U.S. users to locate, they did and rapidly learned how to utilize it. The oldest ‘mainstream’ emoji was used in Yahoo Messenger. Unicode emoji were ultimately finalized in 2010. That is, companies such as Google, Microsoft, Facebook, and Twitter can begin developing their own Emoji that will appear in messages sent from other operating systems. Every year, new emojis are created (both emoji and emojis are acceptable plural forms of the word). All emoji updates are tracked by emojipedia.org across all platforms and operating systems. More than 1800 emojis are available, covering a wide range of topics. Emojis cover a wide range of topics, including transportation, food, and a variety of wild and domesticated animals, as well as social media platforms, weather, and body functions. Although the code for each emoji is the same, different sites, such as Twitter and Facebook, design their emojis differently. The Royal Opera House in London staged 20 emoji-based operas and ballets, Google declared the end of its “blob emojis,” and the World Emoji Awards winners were announced live from the New York Stock Exchange’s trading floor and televised on Cheddar. Only Apple used a calendar emoji with a date on, 17th July, when Emojipedia was considering a day to hold World Emoji Day. As a result, they’ve chosen to commemorate emojis on July 17th as well. The main goal of the day is to encourage people to use emoticons and to spread the joy that they offer to everyone around us.