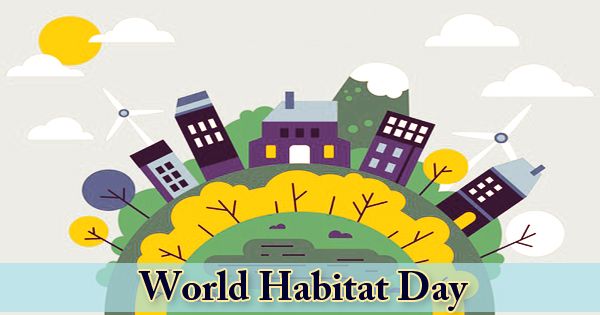 World Habitat Day is celebrated every year on the first Monday of October all over the world. The United Nations (UN) observes the day to reflect on the condition of towns and cities and on the universal right of everyone to adequate shelter. It also aims to remind people that they are responsible for the living conditions of future generations to come. The day is also planned to remind the world that everyone has the power and the duty to shape the future of cities and towns. Via their special events emphasizing the need of secure, civilized, and inexpensive shelters for the common citizen, supporters of the affordable habitat worldwide work hard for adequate shelter around the world. In Nairobi, Kenya, World Habitat Day was first celebrated in 1986, and “Shelter is My Right” was the theme chosen for that year. In several nations around the world, World Habitat Day is celebrated, including in countries such as Angola, China, India, Mexico, Poland, Uganda, and the United States. In order to explore the problems of rapid urbanization and its effect on the environment and human poverty, numerous initiatives around the globe are coordinated. Activities can include award ceremonies, including the award for the “Habitat Scroll of Honour.” The General Assembly of the United Nations has agreed that this should be an annual affair, and the first Monday of October has been selected. In several nations around the world, the day is celebrated and different events are arranged to discuss the issues of rapid urbanization and its effect on the environment and human poverty. Annual themes for World Habitat Day have been diverse and have included “Shelter for the Homeless”, “Our Neighbourhood”, “Safer Cities,” “Women in Urban Government,” “Cities without Slums” and “Water and Sanitation for Cities.”

World Habitat Day is not a public holiday, but a worldwide observance. There is a global housing crisis, with nearly 1.6 billion people living in low-standard housing worldwide and almost 100 million homeless people. It suggests that certain serious steps need very much to be taken otherwise the number of slum inhabitants would increase continuously throughout the world. The goal of World Habitat Day is to draw people’s attention to poor people’s anxious need for appropriate housing. The ‘Habitat Scroll of Honour’ award, which was initiated in 1989 by the United Nations Human Settlements Program (UNHSP), is a significant highlight of the day. It is considered to be the world’s most prestigious award for human settlements and seeks to honor programs that render outstanding contributions in areas such as the provision of shelter, highlighting the plight of the homeless, leadership in post-conflict reconstruction, and developing and improving the quality of urban life and human settlements. In order to prevent the chaotic growth of urban sprawl and all the related issues that are generated as a result, UN-Habitat makes clear the need to design cities. Cities are development engines. In order to realize their visions of a better existence, many individuals from rural areas worldwide long to migrate to cities. This dream is often not realized, but for no cause other than a vague hope of a better future and prosperity, people continue to flock to towns. An estimated 1.8 billion people in our cities worldwide were still living in slums and informal settlements, insufficient housing, or homelessness before the pandemic started. Around 3 billion people lack basic facilities for hand-washing. This means that, due to the lack of basic care and vulnerability to various socio-economic and environmental risks, millions of people worldwide are more likely to experience poor health. A well-planned town will carry only that with it. Cities can be hubs for economic activities and urban issues can be resolved, and both current and potential residents can continue to be provided with opportunities. Many that are good excel in getting jobs or starting their own companies, which generates more opportunities for employment in turn. On the other hand, cities can also become a place where there can be an abundance of marginalization, deprivation, and social exclusion. A significant factor in ensuring that this is avoided is access to sufficient housing. A human right and a cause for all other fundamental rights is accommodation. Shantytowns that do not have sufficient infrastructure, community organization, or tenure protections have been generated by high levels of population density, combined with poor construction techniques. A complete breakdown will result in a chaotic situation and tremendous loss of life in the event of a disaster of any kind.