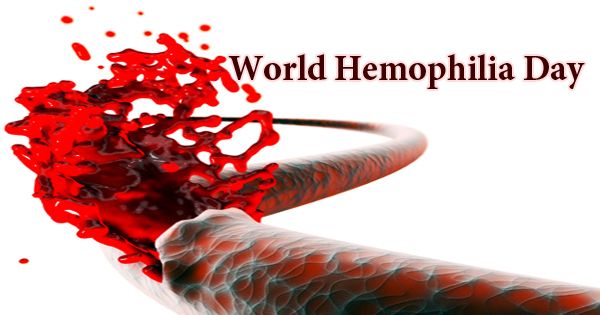 The World Federation of Hemophilia (WFH) celebrates “World Hemophilia Day” on 17th April each year. The primary objective of World Hemophilia Day is to raise awareness of the condition and bring to the general public knowledge and attention to this subject. A day of awareness of the condition is observed and it also helps to draw volunteers and collect funds for the World Federation of Hemophilia (WFH). Approximately 400,000 individuals worldwide are affected by hemophilia, many of whom are not completely aware of their condition or are not receiving the treatment they need. Since hemophilia is a relatively small percentage of the world’s population, many people are unaware of how debilitating this disease is and how much more complicated and dangerous it makes the lives of those who have it. And this is where World Hemophilia Day comes in. The World Federation of Hemophilia (WFH) is a non-profit international organization committed to improving the lives of individuals with hemophilia (also spelled haemophilia) and other genetic bleeding disorders. This educates hemophiliacs and lobbies for enhanced medical care. 75% of people in the world with bleeding disorders do not know it and do not receive care. In the 10th century, hemophilia was first discovered when doctors began to take a serious interest in people, especially males, who were bleeding to death after suffering only minor injuries. It was named Abulcasis at that time. Sadly, because of the limited technology of the day, it was difficult to adequately investigate the situation. World Hemophilia Day has been celebrated in various countries since 1989 to increase knowledge and awareness of hemophilia and other related bleeding disorders. Many individuals are urged to engage in awareness-raising efforts to tell the general public about the condition of hemophilia and a wide variety of events that are planned for the day. Anyone may get interested in the events, but the event is normally attended by staff of different health organizations.

On World Hemophilia Day, various activities are organized every year, packed with educational presentations and other events that raise understanding of the condition and those suffering from it. Media events, awareness programs, and other activities are performed by health system staff along with patient groups worldwide to inform people suffering from hemophilia and the general public about bleeding disorders and to demonstrate the essence of proper treatment. They might consider making a donation to the World Federation of Hemophilia to help support their fight against this crippling disease, particularly in the poorest parts of the world, if anyone is unable to attend. The World Federation of Hemophilia, headquartered in Montreal, Canada, was established in 1963 by Frank Schnabel. The organization is currently made up of 113 countries and is formally recognized by the World Health Organization (WHO). World Hemophilia Day’s annual celebration has its own theme. The theme is distinct in the observance of the day each year. Patients with hemophilia bleed longer than usual; some may even experience spontaneous bleeding in their muscles, joints, and other body components. Patients with this disease need the utmost care and treatment because, in some cases, the condition is very serious. Hemophilia understanding is important because 75 percent of individuals who suffer from this disorder are not aware of it because the illness is largely hereditary. The best forum to raise awareness of the problem and generate funds for the improvement of the hemophilia community is World Hemophilia Day.