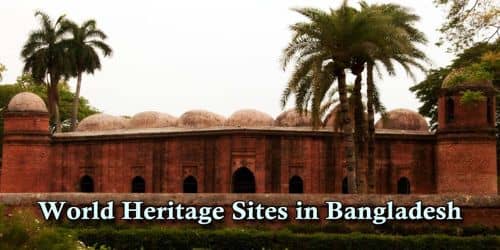 World Heritage Site is an extraordinary site which is historically and geographically important for the world. It is usually declared by UNESCO and recognized by all. The World Heritage Committee is constituted for a period of four years comprising representatives from 21 countries across the globe. Bangladesh is a country having a fascinating power to attract travelers and visitors. Though it is a small country it has three World Heritage Sites. As a small country, it is fortunate enough to be in possession of three World Heritage Sites. They are the historic Shatgombuj Mosque of Bagerhat, the ruins of Buddhist Vihara of Paharpur and the mangrove forest, the Sundarbans located in the South-west portion of Bangladesh. The first international campaign of the working group for preserving the historical sites of Bagerhat and Paharpur was launched in 1986 and the second campaign was conducted in 1990. Following the move, the International Expert Committee paid several visits to Bangladesh in 1989, 1990, 1991, 1993, 1996, 1999 and 2002 to find out the ways and means for protecting the architectural remains. An international seminar on Preservation of Terracotta plaques was held in 2004. Out of these, I wish to visit the Shatgombuj Mosque in Bagerhat. The Shatgombuj Mosque is a 15th-century Islamic edifice situated in the suburbs of Bagerhat. It has sixty pillars which support seventy-seven exquisitely curved domes. The founder of this mosque was Saint Khan Jahan Ali. I expect to visit the ‘Mazar’ of Khan Jahan Ali there. I also wish the fabulous architectural design of the mosque. And then I would like to see the famous ‘Ghoradighi’. I think such a visit will help me broaden my outlook. The educational institutions of our country should include these sites in their syllabus. They also should keep some tour programs for their students in order to enable them to have a better idea of these historical Sites.