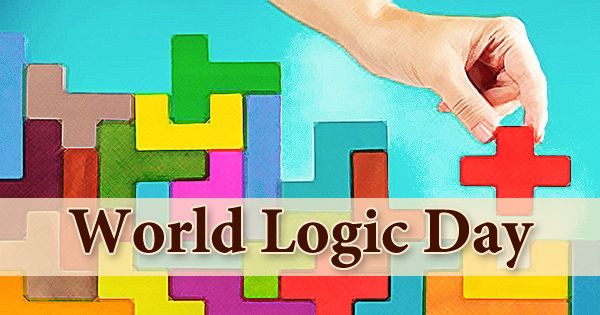 World Logic Day was declared by UNESCO in November 2019 in collaboration with the International Council for Philosophy and Human Sciences (CIPSH) to be observed on the 14th of January every year. One of the most distinguishing characteristics of humanity is the capacity to think. The idea of humanity is synonymous with concepts such as consciousness, intelligence, and reason in various cultures. Human beings are described as “rational” or “logical” animals in the classic western tradition. Many cultures have studied logic as an inquiry into the concepts of reasoning throughout history, and logic has played an important role in the advancement of philosophy and science since its earliest formulations. Before the UNESCO declaration, “World Logic Day” was first observed on January 14, 2019. World Logic Day aims to raise awareness of logic’s philosophical roots, conceptual importance, and practical implications among interdisciplinary science communities and the general public. Many laypeople regard logic as a method and are unaware that it is the subject of research and development, so “The Enduring Evolution of Logic,” a guest post by Thomas Ferguson and Graham Priest, may be worth sharing on World Logic Day. Joel Friedman’s “Mathematical Logic and Foundations, 1847-1947” depicts some of the evolution of logic. The date chosen for World Logic Day, 14 January, corresponds to the dates of Kurt Gödel’s death and Alfred Tarski’s birth, two of the twentieth century’s most influential logicians. Despite its undeniable significance in the advancement of information, sciences, and technology, logic remains underappreciated by the general public.

The International Council for Philosophy and Human Sciences (CIPSH) and UNESCO have declared World Logic Day to bring the philosophical past, conceptual meaning, and practical implications of logic to the attention of interdisciplinary science communities and the general public. Professors of philosophy hope to strengthen their students’ critical thinking skills, debate what should be taught in introductory logic courses, and build and test new ways of teaching students to evaluate arguments and reason well. Some people use amusing videos to demonstrate logical errors. According to UNESCO, rationality will aid in the development of “a culture of harmony, dialogue, and mutual understanding focused on the advancement of education and science.” World Logic Day is a dynamic and global annual celebration that aims to foster international cooperation, promote the advancement of logic in both research and teaching, support the activities of organizations, universities, and other logic-related organizations, and improve public awareness of logic and its implications for science, technology, and innovation. In the middle of 2019, the UNESCO Executive Board was asked to declare World Logic Day. It was debated and adopted at the UNESCO Executive Board’s 207th session in October 2019 and will be presented to the 40th General Conference of UNESCO. The 40th General Conference declared the 14th of January as “World Logic Day”, which is organized by CIPSH (International Council for Philosophy and Human Sciences). The Logica Universalis Association, an informal meta-association dedicated to logic established by Jean-Yves Béziau, sponsored World Logic Day 2019 by encouraging logicians all over the world to hold their own events on January 14, 2019. Around sixty of these events were held in 33 countries. Furthermore, through promoting a culture of peace, dialogue, and mutual understanding through the advancement of education and science, World Logic Day will help to promote a culture of peace, dialogue, and mutual understanding.