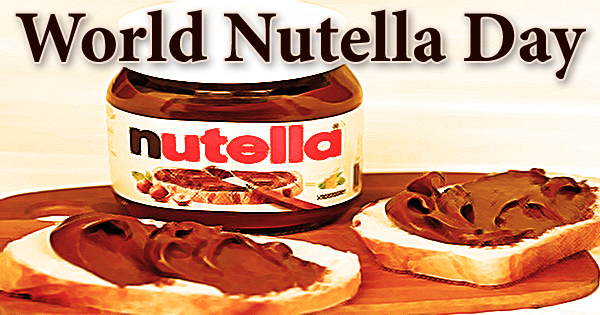 Nutella (/nuːˈtɛlə/; Italian pronunciation: nuˈtɛlla) is a worldwide culinary phenomenon. People would be hard-pressed to find anyone who hasn’t heard of Nutella, from Asia to Africa, from South America to the point of Canada. Nutella is a spread made by the Italian firm Ferrero. It was initially presented in 1964, while its first version was in 1963. The inaugural World Nutella Day was held in 2007. Sara Rosso, an American blogger residing in Italy at the time, came up with the concept for the day. What inspired her to create World Nutella Day? Of course, it’s because she adores the stuff! Nutella enthusiasts all across the world celebrated the day with passion and shared their delight on social media. The event began simply by sharing photos, ideas, and recipes on social media, but it has now gone well beyond its simple beginnings, with even Nutella joining involved. Nutella’s key components are sugar and palm oil (greater than 50 percent ). It also has 13 percent hazelnut, cocoa solids, and skimmed milk. Nutella includes soy products in the United States and the United Kingdom. In several places, Nutella is referred to as “hazelnut cream.” It is not allowed to be branded as “chocolate cream” in Italy since it does not fulfill the necessary cocoa solids content requirements. Ferrero utilizes around a quarter of the world’s hazelnut supply, although not all of it goes into Nutella. Since 2015, Ferraro, the manufacturers of Nutella, have taken over the celebration from Sara, holding competitions and awarding incredible prizes, as well as continuing Sara’s original concept of inviting Nutella fans to post their own creations on social media with the hashtag #worldnutelladay. The phrase “necessity is the mother of invention” is widely used. When cocoa is scarce, adding hazelnuts may have been an Italian survival strategy. They produced a paste of chocolate and hazelnuts in the 1800s in the northern Italian city of Piedmont, during a period when the nuts were plentiful but the cocoa was scarce. Cocoa was once again difficult to come by after the close of World War II. Pietro Ferrero, a pastry maker, produced Giandujot loaves out of this delicious mixture. On May 14, 1946, the Ferrero Company was established. Ferrero didn’t create a spreadable version of the paste until 1951. We didn’t even know what Nutella was until Ferrero’s son Michele gave the jar of creamy hazelnut and chocolate the name in 1964.

The Nutella recipe has a distinct ingredient list in different countries. The business tweaked the formula significantly in November 2017, adding more sugar and skimmed milk powder. The Hamburg Consumer Protection Center determined that the cocoa content was also lowered since the product’s color was lighter in tone. Consumers were “outraged” or “going nuts” as a result of the recipe change, according to several news reports. Gianduja, a classic Piedmont dish, was made up of around 71.5 percent hazelnut paste and 19.5 percent chocolate. It was created in Piedmont, Italy, in response to a scarcity of cocoa beans during postwar rationing that restricted the raw material’s supply. By weight, Nutella includes 10.4 percent saturated fat and 58 percent processed sugar. Nutella has 200 calories per two-tablespoon (37-gram) portion, with 99 calories from 11 grams of fat (3.5 g of saturated fat) and 80 calories from 21 grams of sugar. Per serving, the spread also has 15 mg of salt and 2 g of protein (for reference Canadian serving size is 1 tablespoon or 19 grams). Nutella is often in the headlines, and in June of this year, the media reported on a strike at Ferrero’s French facilities, causing fans to be concerned about a possible scarcity. Then, two months later, newspapers were ecstatically reporting on 1kg jars of Nutella being offered for £4 at Morrison’s. According to one man who experimented with consuming Nutella at every meal for a week, a dollop in a cup of coffee is the best way to consume it. It’s been incorporated into a slew of dishes and products, but our new favorite, Nutella-filled tiny doughnuts from La Tua Pasta, recently appeared on Erudus. Nutella is made in a variety of locations. It is made in a facility in Brantford, Ontario, Canada, and more recently in San José Iturbide, Guanajuato, Mexico, for the North American market. Nutella doesn’t need to be refrigerated since the high sugar content works as a preservative.