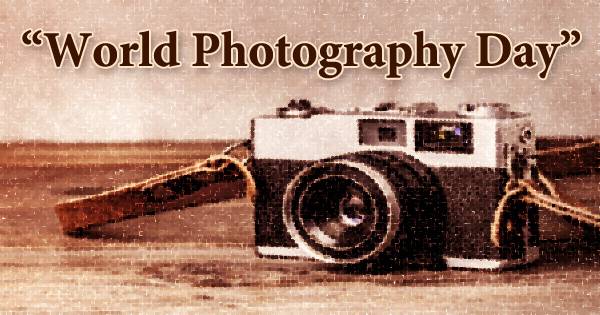 “World Photography Day” is an annual global celebration of photography’s art, craft, technology, and culture. Every year on the 19th of August, the day is celebrated around the world with great zeal and enthusiasm. The day is not only commemorated by die-hard photographers, but by people from all walks of life who come together to encourage future generations to appreciate the value of photography, regardless of their occupations or interests. For countless people around the world, photography has been an ever-increasing means of personal expression and appreciation since the early nineteenth century. An image can capture a place, an event, an idea, or a moment in time. As a result, an image is considered to be worth a thousand words. Photographs can express a feeling faster than words, and in some cases much more effectively. An image has the ability to make the viewer see the world through the eyes of the photographer. Although photography is a relatively recent development, the desire to capture moments and memories and share them with others dates back to the dawn of time. The invention of the camera obscura was one of the first attempts to capture events. It’s a gadget with a hole through which light passes, creating an inverted image of the outside scene. Camera obscura has been used to reconstruct events for decades, with artists sketching or tracing the image in order to capture it. The oldest records of camera obscura date back to 400 BCE China. The aim of World Photography Day is to raise awareness, exchange ideas, and inspire people who work in the field of photography. On this day, millions of people capture various ideas and share their worlds with others, as well as strive to live in the imaginations of other photographers and bring more happiness through photography. In a world where billions of images are uploaded every hour, World Photography Day motivates many minds to think differently by inspiring many photographers from around the world to share their vision of a single picture with a single intent.

Photography as we know it today did not emerge until the early 1900s, when scientists discovered a way to permanently capture a scene on a surface using light-sensitive chemicals. The first photograph that has survived dates from 1826 or 1827. It was taken by Joseph Nicéphore Niépce, a French inventor. Niépce’s estate in Burgundy, France is depicted in this image. The Daguerrotype, a photographic method invented by Frenchmen Lois Daguerre and Joseph Nicephore Niepce in 1837, is the source of the day’s roots. According to sources, the French Academy of Sciences made an announcement about the Daguerreotype on January 9, 1839. The French government received the patent after ten days and declared that the invention was a gift to the world, with no copyright. In the twentieth century, cameras and photography underwent several technical advances. Photography has become a common hobby thanks to the availability of low-cost, high-quality digital cameras. Thomas Sutton took the first long-lasting color photograph in 1861. The first digital photograph, on the other hand, was taken in 1957, almost 20 years before Kodak’s engineer invented the first digital camera. World Photography Day is observed every year on August 19th to encourage photography as a hobby and to inspire photographers all over the world to share a single photograph with the rest of the world. On August 19, 2010, the first World Photography Day was celebrated. On this date, nearly 270 photographers from around the world uploaded their photos to a global online gallery. The online gallery attracted visitors from over 100 countries. The first official World Photography Day was held at this gathering. The aim of World Photography Day is to exchange ideas, inspire everyone to do their part in this area, and draw people’s attention to the work of those who first brought photography to the world. The day is celebrated so that people from different countries and cultures can come together under one roof and on a common forum to coordinate photo exhibits, contests, lectures, workshops, and seminars, among other things. This day not only recognizes those who have contributed in the past, but also inspires the next generation to get interested and brush up on their skills under the guidance of eminent experts in the field. Many people no longer use film in their cameras due to the rise of digital photography. Some photographers, on the other hand, prefer film to digital photography. They choose film for a variety of reasons:

Every year, “World Photography Day” has a different theme, which is determined by the criteria set in conjunction with the day’s commemoration. Various photographic societies will hold online and offline competitions in a number of categories. People of all ages, backgrounds, occupations, and traditions are encouraged to participate in the contest by sharing their stories and allowing others to benefit from their experiences. World Photography Day is more than just a day; it is a constant soft touch of the eye, a burst of light, and a moment in our lives that is forever captured. Photography has grown into a medium that binds us all, and it has become an integral part of our lives.