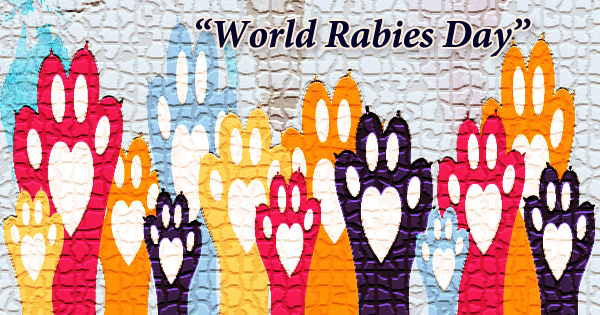 Every year on September 28, World Rabies Day is commemorated to promote awareness about rabies prevention and to highlight efforts in combating this terrifying illness. The Global Alliance for Rabies Control, a non-profit organization with headquarters in the United States, is spearheading an international awareness campaign. The day also commemorates the birth of Louis Pasteur’, a French chemist and microbiologist who created the first rabies vaccine. International human and veterinary health organizations, including the World Health Organization, the Pan American Health Organization, the World Organization for Animal Health, and the US Centers for Disease Control and Prevention, have supported the day as a United Nations Observance. Safe and efficient animal and human vaccinations are among the main instruments available today to eradicate rabies-related human mortality, while community awareness is the key to effective rabies prevention. World Rabies Day is a chance to think about how rabies affects your community and those across the world. Rabies can still be prevalent in many regions of the United States, especially in animals. However, dog bites acquired during overseas travel account for about a fifth of recorded rabies cases in the United States. The goal of this day is to promote awareness about the effects of rabies on humans and animals, to give information and guidance on how to prevent the illness in at-risk areas, and to encourage lobbying for greater rabies control efforts. Many government organizations and disease control centers that promote World Rabies Day provide media kits that include posters, brochures, and press releases in order to raise awareness about rabies and how to avoid it. Symposiums are often organized at this time of year to honor researchers who were pioneers in the development of a rabies vaccine. Some groups conduct competitions, such as t-shirt design contests, to promote the event’s theme, while some associations and clinics provide free pet vaccines.

Rabies is still a major public health issue in many parts of the world. Over 99 percent of all human deaths from rabid dog bites occur in underdeveloped countries, with Africa and Asia accounting for 95 percent of all deaths. People and animals on every continent, with the exception of Antarctica, are at danger of getting rabies. Despite the fact that rabies is a disease that may be completely avoided, more than 59,000 individuals die from it each year throughout the world. World Rabies Day is a chance to reflect on our efforts to combat this fatal illness and to remind ourselves that the struggle is far from done. One important issue with rabies prevention is that those at risk lack fundamental life-saving information. Organizations working on the issue might frequently feel lonely, and because rabies is a neglected illness, it does not draw enough funding, despite the fact that the world has the means and knowledge to prevent rabies and no one should die from it. According to the World Health Organization, Asia and Africa account for over 95% of all human fatalities. A bite from an infected dog causes the majority of human deaths. Children under the age of 15 account for 30 to 60 percent of dog bite victims. There are safe and efficient vaccinations available for humans who have been bitten by a disease-carrying animal, but because to the expensive cost, use in impoverished countries is minimal. Health awareness days can assist improve illness policies and resources for prevention and control. As a result of this knowledge, a rabies awareness day was created. The Centers for Disease Control and Prevention (CDC) and the Global Alliance for Rabies Control (GARC) created World Rabies Day to bring together key partners to address rabies prevention and control. On September 8, 2007, the debut campaign saw almost 400,000 individuals from at least 74 countries participate, with the objective of motivating 55,000 people to take action, one for each person who dies each year from rabies. The event was staged again in 2008, but this time on September 28 rather than September 8, and from that year onwards, September 28 has been utilized to publicize the event. World Rabies Day was identified as a useful tool for assisting with rabies prevention by a network of international government agencies, academics, NGOs, and vaccine manufacturers in a 2011 review, which targeted at-risk communities, animal health workers, public health practitioners, governments, key opinion leaders, and experts. On World Rabies Day in 2008, more than 393,000 people took part, and rabies education messages reached more than 50 million people. As a result of this event, money were available to begin grassroots education and control programs in five nations. World Rabies Day was designed to be a day of education, awareness, and action for all levels of society, from the international to the local, to support the dissemination of rabies prevention messages. Its goals include promoting worldwide awareness about rabies and how to prevent it, as well as teaching individuals in rabies-endemic countries on how to avoid contracting the disease. World Rabies Day, which emphasizes the effect of human and animal rabies and advocates ways to prevent and halt the illness by battling it in animals, is supported by a number of organizations, including WHO and the US Centers for Disease Control (CDC) and Prevention.