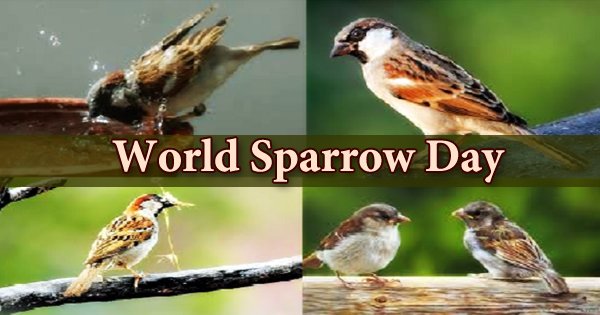 Every year on March 20th, “World Sparrow Day” is observed to raise awareness about the bird. The need to commemorate this day arose from the country’s dramatic population decline. The house sparrow is in danger of becoming extinct. These small, beautiful birds rely on us for survival in this ever-increasing concrete jungle, and we humans rely on them for a healthy ecological environment. The aim of the day is to raise awareness about the house sparrow and other common birds that live in urban areas, as well as threats to their populations. The Nature Forever Society of India organized World Sparrow Day in cooperation with the Eco-Sys Action Foundation (France) and a number of other national and international organizations around the world. The house sparrow is one of the most widely distributed and oldest bird species on the planet. It has grown alongside humans over time and can still be found in large quantities all over the world. However, the sparrow’s habitat has been dwindling in recent years. This also suggests that our climate is rapidly deteriorating and having a significant impact on our well-being. Apart from impacting the population of house sparrows, pollution has a significant unnoticed effect on our daily lives. Mohammed Dilawar, an Indian conservationist who began his work helping the house sparrow in Nashik and was called one of Time’s “Heroes of the Environment” for his efforts in 2008, founded the Nature Forever Society (NFS). The idea for a World Sparrow Day celebration arose during a casual conversation at the Nature Forever Society’s office. The intention was to designate a day for the house sparrow in order to relay the message of conservation to the house sparrow and other common birds, as well as a day of celebration to celebrate the beauty of common biodiversity, which is sometimes overlooked. In 2010, various parts of the world commemorated the first World Sparrow Day.

The day was marked by a variety of activities and events, including art contests, public awareness drives, and sparrow processions, as well as media interactions. Over 50 countries have participated in World Sparrow Day to date. “I Love Sparrows” is the theme for World Sparrow Day. The theme was chosen in the hopes that more people would recognize the importance of the human-sparrow relationship. Pesticide usage has increased, construction patterns have changed, and gardens have vanished from homes, all of which have contributed to the dramatic decrease in the number of sparrows in recent years. Sparrows have also died as a result of radiation from telephone and television towers. Birds navigate by sensing the earth’s magnetic fields, and mobile radiation is known to annoy them, obstructing their ability to fly. The aim of World Sparrow Day is to provide a forum for people working on the conservation of the house sparrow and other common birds to network, collaborate, and share conservation ideas, resulting in better science and better outcomes. Its aim is to provide a gathering place for people from all over the world to come together and form a force capable of advocating for and raising awareness about the importance of conserving common habitats and species with low conservation status. Its chirping has faded as their population has decreased dramatically in urban areas over the last 20 years. The decline of the house sparrow, Passer domesticus, has been attributed to a variety of factors by ornithologists. They include the lack of nesting sites in modern houses, pesticide use, and food scarcity. Invertebrate fauna declines as a result of heavy pesticide use in kitchen gardens and fields. The survival of newborn sparrows is largely dependent on small insects. On March 20, 2011, NFS instituted the first Sparrow Awards in Ahmedabad, Gujarat, to inspire efforts made toward this cause and to selflessly preserve the environment.