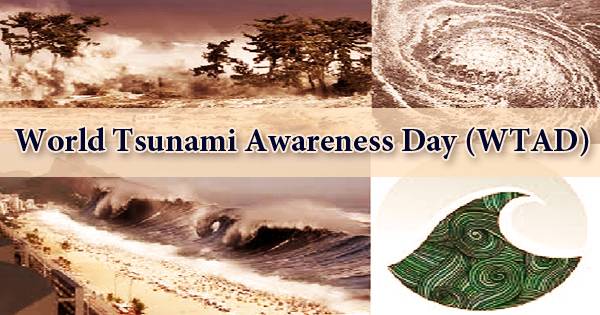 The United Nations General Assembly declared 5th November as “World Tsunami Awareness Day (WTAD)” in December 2015 to foster a global culture of awareness of tsunamis. The day supports the implementation of local disaster risk reduction strategies at national and community levels to save more lives from disasters. Often concentrated in low-lying and densely populated areas, coastal populations are the most vulnerable to coastal threats, including tsunamis, with severe human and economic losses. An international collaboration, as well as engagement in reducing our threats from these coastal natural hazards, is essential to deeper political and public understanding. An estimated 50% of the world’s population will live in coastal areas exposed to floods, storms, and tsunamis by the year 2030. Having plans and policies in place to reduce the impact of tsunamis will help build greater resilience and protect at-risk populations. The Intergovernmental Oceanographic Commission (IOC) of UNESCO works to coordinate national and regional tsunami early warning services, raising global awareness about effective actions, policies, and practices to reduce exposure to disaster risk through its four Tsunami Warning and Mitigation Systems for the Pacific, Indian Ocean, Caribbean, and North-Eastern Atlantic, Mediterranean and Connected Sea regions. Via education programs and regular tsunami communication and evacuation exercises, the IOC also supports the Member States by increasing cooperation, preparation, and awareness of tsunamis among people and communities around the world. The term “tsunami” contains the words “tsu” (meaning harbour) and “nami” in Japan (meaning wave).

World Tsunami Awareness Day (WTAD) was Japan’s brainchild, which over the years has built up considerable knowledge in areas such as tsunami early warning, public action, and better rebuilding after a disaster to mitigate potential impacts due to its frequent, bitter experience. In cooperation with the rest of the United Nations system, UN Disaster Risk Reduction (UNDRR) promotes the observance of World Tsunami Awareness Day. This event will seek to highlight the importance of having national and local tsunami plans to help protect at-risk communities and promote the implementation of plans by more countries, and to recognize problems and share lessons learned in reducing the risk of tsunamis and incorporating tsunamis into strategies to reduce the risk of multi-hazard disasters. A tsunami is a series of huge waves caused by an underwater disturbance typically linked to earthquakes that occur below or near the ocean. A tsunami can also be caused by volcanic eruptions, submarine landslides, and coastal rockfall, as can a large asteroid that impacts the ocean. They derive from a vertical shift with the consequent removal of the mass of water from the seafloor. Tsunami waves also look like water walls and can strike the shoreline for hours and be harmful, with waves arriving every 5 to 60 minutes. The first wave may not be the biggest, and the largest is always the 2nd, 3rd, 4th, or even later waves. When a wave floods or floods inland, it also recedes to the sea as far as a person can see, so that the seafloor is exposed. Within minutes, the next wave then rushes ashore and brings with it a lot of floating debris eroded by previous waves. The importance of education, including evacuation exercises, to ensure that communities respond decisively and without panic when the tsunami alarms hit them, is a popular theme that has emerged time and again. It is even more critical for local tsunamis that each person knows the natural warning signs of the tsunami and immediately self-evacuates as the waves could strike in minutes. A tsunami may be caused by heavy and shallow underwater earthquakes, submarine landslides, submarine volcanic eruptions, and onshore volcanoes, or by the collapse of cones. Many tsunami waves have a height of less than 10 feet. They can reach 100 feet in extreme events. Large tsunamis can flood inland for more than a mile. The first wave may not be the biggest or most destructive, and it may take hours or days for the threat to last. A significant danger to life and property is tsunamis. Also, small tsunamis, particularly for swimmers, surfers, and boats in the harbors, can be dangerous. In reality, the observance of the day (World Tsunami Awareness Day) will help to spread awareness among people around the world about the dangers of tsunamis and emphasize the importance of early warning systems to minimize the damage caused by the often-devastating natural risk. It also aims at reviving conventional tsunami awareness.