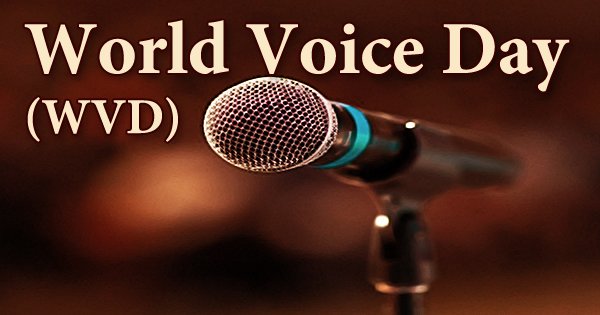 World Voice Day (WVD) is an annual celebration of the phenomenon of voice that takes place on April 16th around the world. In school, on the job, and in social situations, the voice is more critical than ever. However, many people misuse their voices by smoking, yelling, drinking, or speaking in an ineffective manner. When complications arise, care is often overlooked, resulting in more serious issues. World Voice Day was created as a special day of understanding, appreciation, and celebration of the human voice to address this. World Voice Day, observed on April 16th each year, owes its origins to a group of Brazilian voice care professionals who founded Brazilian Voice Day in 1999 to honor the voice. The aim is to show the incredible significance of the voice in everyone’s everyday lives. Voice is an important part of successful and safe communication, and World Voice Day raises awareness about the importance of preventing voice disorders, rehabilitating deviant or sick voices, educating the creative voice, and studying the role and application of voice around the world. Our voices are more than just the sounds we create through our mouths. There’s more to it than just words. The sound of one’s voice denotes the presence of one’s thoughts. It binds people and frees them from the shackles of silence. One of the goals of World Voice Day is to empower anyone who uses their voice for business or pleasure to learn how to take care of it, where to get help and training and to support voice study. The Brazilian Laryngeal Speech Society, headed by Dr. Nedio Stephen, was the first to commemorate the day on April 16th. To celebrate the voice. Brazilian Voice Day was later established. Argentina and Portugal were among the countries that celebrated it. It was later designated as World Voice Day when the US Otolaryngology Clinic-Head and Neck Surgery started celebrating it in 2002. Since then, members of the Academy’s Speech, Voice, and Swallowing Disorders Committee have collaborated with colleagues from Brazil and Europe to create the annual World Voice Day that we celebrate today.

World Voice Day serves as a public awareness movement to raise awareness about the power of the human voice and the importance of preventative care. It tells people that their voice is the most valuable blessing they have and that they can not take it for granted. For those who have lost their voice due to a voice-related disorder, this day is a challenge. We also honor the millions of people who have worked hard to conquer voice-related obstacles in their lives. Many disciplines, including medicine, speech-language pathology, music, physics, psychology, phonetics, art, and biology, study and apply voice production. On April 16th, the World Voice Day was created with the primary aim of raising public awareness of the value of the voice and raising awareness of voice problems. Several physicians, scholars, and experts will gather for a thorough discussion on this day. They discuss how to avoid voice disorders, how to rehabilitate deviant and sick voices, how to train creative voices, and how to raise awareness about the importance of studying voice function and application. This day is intended to raise awareness about the importance of preventing voice disorders, rehabilitating the deviant or sick voice, educating the creative voice, and exploring the role and application of voice around the world. Another goal of World Voice Day is to encourage anyone who uses their voice for business or pleasure to learn how to care for it and to seek help and training, as well as to promote voice study. Furthermore, even when faced with a voice-related issue, people often disregard important preventive care. As a result, this initiative was launched to resolve this important topic. The day serves as a public awareness campaign to raise awareness about the value of human speech and the importance of preventative care. In 2012 three voice researchers, Prof. Johan Sundberg (Sweden), Prof. Tecumseh Fitch (Austria), and Dr Filipa Lã (Portugal) invited voice experts from a number of countries to form an international website group for the celebration of World Voice Day. Prof. Johan Sundberg and Dr. Gláucia Las Salomo directed the website (Brazil). Currently, the organization has 66 members who organize and help plan World Voice Day activities in their respective countries. Mara Behlau, Thays Vaiano, and Mauro Andrea are currently in charge of the website. Nearly 600 events were held in 50 countries in 2018, and all of them are identified on the website world-voice-day.org, where more information can be found.