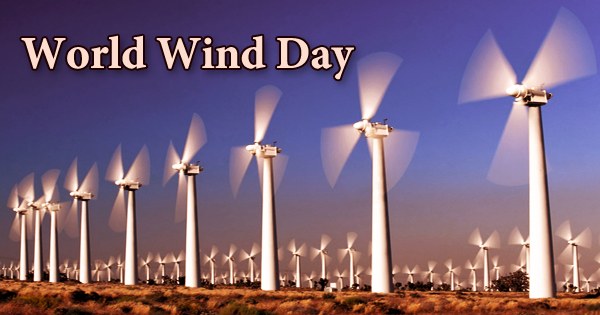 World Wind Day, also known as Global Wind Day, is a worldwide celebration that takes place on June 15th. Wind Europe (Wind Europe) and GWEC are the organizers (Global Wind Energy Council). The food we eat, the clean air we breathe, and the water we drink provide us with energy. Each of them has additional applications, such as air in the form of wind, which can be useful in a variety of ways. The wind has a crucial function in reproduction and can be both harmful and beneficial. It’s a day to celebrate wind energy, share knowledge, and educate adults and children about its power and potential to improve the world. National wind energy groups and firms interested in wind energy production hold events in various countries across the world in collaboration with EWEA and GWEC. The day is inspiring because it raises awareness of wind energy, which is a natural kind of energy. It also puts light on all of the ways that wind energy serves to develop energy systems and how it promotes economic and other forms of growth in society. More than 591 GW of wind generating capacity has been installed in 91 countries throughout the world, with continuous expansion expected as wind power becomes one of the most cost-effective energy sources available. Wind energy helps to achieve global development and climate goals by creating jobs, lowering carbon emissions, boosting local investment, and reducing energy poverty. Today 91 countries have installed wind energy, with over one-third having installed more than 1GW. Emerging markets in Latin America and Asia, in addition to existing markets in Europe, China, and North America, will continue to fuel growth in the coming years. The wind is the bulk movement of air on the Earth’s surface, and it can take many forms depending on scale, speed, the factors that cause it, the locations where it occurs, and its influence. The wind was frequently linked to one or more wind gods or as a manifestation of the supernatural in folklore.

Wind energy will continue to expand and play an increasingly important part in the global energy transition to a flourishing low-carbon economy. This year, onshore and offshore wind saw historically low costs, making wind power more competitive than ever against traditional electricity sources. In many regions of Europe, onshore wind is already the most cost-effective form of new electricity generation, with the offshore wind not far behind. In 2007, EWEA founded Wind Day, then in 2009, EWEA (European Wind Energy Association) and GWEC (Global Wind Energy Council) partnered up with the goal of coordinating events worldwide, and the name was changed to Global Wind Day or World Wind Day. In 2011, events were held in 30 countries across four continents. Visits to onshore and offshore wind farms, awareness campaigns, demonstration turbines in cities, wind seminars, and a wind parade were among the events. Many events took place on Global Wind Day (15 June), as well as in the days and weeks leading up to and after it. There were 250 events held throughout the world in 2012, as well as a popular photo competition. The day’s major goal is to showcase the power and potential of wind energy to redefine our energy systems by celebrating it, exchanging information, educating the young and elderly about it, and highlighting its strength and potential to alter our energy systems. Organizations that operate in wind energy generation, such as EWEA and the Global Wind Energy Council (GWEC), host events in various nations throughout the world. The celebration of World Wind Day has a number of objectives. Its goal is to teach children and adults about the power that wind energy generates through the usage of wind turbines. It disseminates information on the advantages of wind power and how it is more cost-effective and competitive than alternatives. Wind energy is one of the cleanest and most renewable sources of energy. In other cases, it is also far less expensive than alternative options. Wind power aids in the reduction of CO2 emissions, resulting in cleaner air for us to breathe. Global Wind Day 2012 gained the support of 18 GWD Ambassadors, who were joined by the Danish Presidency of the EU and the United Nations. ‘We need to double the share of renewable energy in the global energy mix by 2030’, said Kandeh K. Yumkella, Director-General of the United Nations Industrial Development Organization (UNIDO) and leader of Secretary-General Ban Ki-Sustainable moon’s Energy for All project. This may be accomplished with a considerable contribution from wind energy, which may be used in both grid-connected and decentralized small-scale systems. Before World Wind Day, a number of activities take place. Plus, on the main celebration day, there are even more activities. Workshops, seminars, instructional tours, and other events are held to demonstrate the power and potential of wind energy.