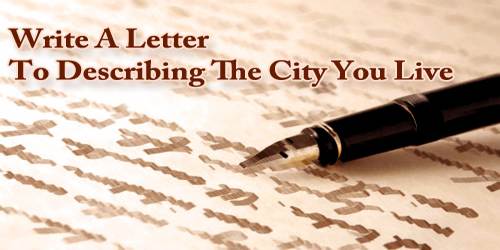 Write A Letter To Describing The City You Live

(Write a letter to your friend describing the city you live in.)

It’s a great pleasure to receive a letter from you. I’m sorry I haven’t written for a long time, I was busy with preparation for exams. However, in your letter you wanted to know about the city where I live in. Now I like to let you know about it. I was born and have grown up in Mymensingh. It is one of the oldest cities in our country. The city is the centre of the surrounding six districts like Tangail, Mymensingh, Sherpur, Netrokona, Jamalpur and Kishoreganj and Mymensingh. It stands on the right bank of the old river Brahmaputra. Its former name was Nasirabad. Its area is 21.73 Sq. KM. Its present population is 0.475 million. About 60 percent population of the city is literate. The principle occupations of the adult males in the city are in the business and service areas. This city is known as a centre for secularism.

My city is also well known for educational institutions like Bangladesh Agricultural University, Mymensingh Medical College, Jatiya Kabi Kazi Nazrul Islam University and Mymensingh Girls’ Cadet College. Also it is related with a rural ballad called Moimonsingho Geetika. The city is located about 120 km north of Dhaka which is the capital of Bangladesh. The communication channels with the capital city and other parts of the country are both road and railway. I feel proud of my city. Hope you would spare some time to visit this place. Write soon and give regards to uncle and aunty.