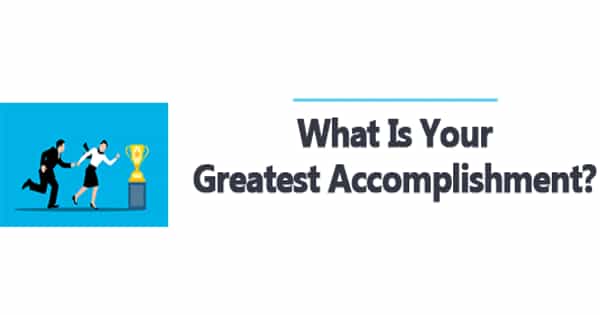 A behavioral interview question is, “What is your greatest accomplishment?” Some examples include: “What are you most proud of?” and “What were your biggest successes in your most recent role?” “Tell me about a time when you went above and beyond what was expected of you.”

I am a seventeen-year-old boy preparing for my A-Level Exam at the end of the year. What can I claim as my accomplishments thus far? I believe that in the materialistic society in which my peers and I live, we tend to imbibe rat race values. As students, we want to get good grades so that we can get good jobs. I enjoy studying and have consistently received As in my classes. There was a year when I finished first in my class in the final exams.

Another accomplishment and memory I cherish are how I was able to improve the relationship between my mother and father. Dad is a successful businessman who is rarely at home. Mum is a bored housewife who constantly nags him to let her go to work. Their constant squabbling depressed me, and one day I vented to them. I persuaded Dad that Mum would be better off with a part-time job. He agreed, and their relationship has improved since then.

My most proud achievement, however, is my successful work in the local old folks’ home. My grandparents had raised me since I was a child. I sobbed bitterly when they died. Since then, I’ve developed a soft spot for the elderly, recognizing their flaws while appreciating their strengths.

When my school’s Community Service Club was first formed, I was a member. Our members made numerous visits to the local nursing home. My enthusiasm and hard work soon led to my unanimous election as Chairman of the club.

Unlike many of my classmates, I do not participate in community service to earn points. I enjoy my work and believe I am contributing to a worthwhile cause. As a result, while some of my peers have stopped visiting the old folks’ home, I continue to spend many enjoyable weekend afternoons there. Many of my classmates are turned off by the smell of the house. Some elderly people are bedridden, and others are unconcerned about their personal hygiene. There is also a nursing and caregiver shortage. Furthermore, some of my friends complain that many elderly people are grumpy and suspicious.

This is where I can help. I talk to the elderly, assist them with their daily tasks, and listen to their problems. They like to tell me about their glory days and the hardships they endured during the Japanese occupation of Malaysia. My attempts to assist them were initially met with suspicion. I can’t blame them; many of them don’t want to be perceived as abandoned old people who are only visited once a year by chattering students.

However, my sincerity and eagerness to assist them won them over. I didn’t mind clipping their nails or changing their adult diapers. Many of my elderly friends now regard me as a friend or foster son, and I refer to them as “uncles” or “aunties.”

Last year, my club hosted a successful Christmas party. The concert was attended by able-bodied elderly people. Many of them expressed a desire to attend another party the following year. As a result, when I reflect on my accomplishments, I am especially proud of my community service at the old folks’ home. I hope to study social work at the university level and work as a social worker in the future because I find great satisfaction in assisting the less fortunate.