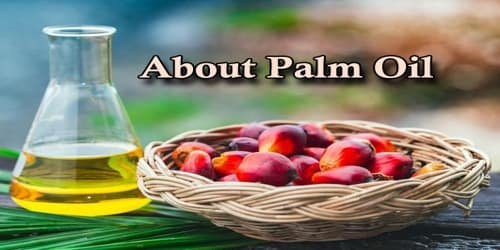 Introduction: Palm oil is an edible vegetable oil high in saturated fats and free of trans fats. It is obtained from the yellow or orange-colored flesh of the fruit. Shortly before harvesting the oil content of the fruit is at it’s highest – between 45 and 50 percent. After harvesting the ripe fruits are sterilized and pressed. This yields crude palm oil.

Palm oil is naturally reddish in color because of high beta-carotene content. It is not to be confused with palm kernel oil derived from the kernel of the same fruit or coconut oil derived from the kernel of the coconut palm (Cocos nucifera). However, crude red palm oil that has been refined, bleached and deodorized, a common commodity called RBD palm oil, does not contain carotenoids.

Humans used oil palms as far as 5,000 years back; in the late–1800s, archaeologists discovered a substance that they concluded was originally palm oil in a tomb at Abydos dating back to 3,000 BCE. It is believed that traders brought oil palm to Egypt.

The oil palm tree (Elaeis guineensis) is a native to West Africa and was imported into SE Asia in the mid 19th century.  Oil palm flourishes in the humid tropics and produces high yield when grown 10 degrees north and south of the equator.

Palm fruit develops in dense bunches weighing 10 kilograms (kg) or more and containing more than a thousand individual fruits similar in size to a small plum which tree produces 2 types of oil.  Palm oil (PO) is obtained from the flesh of the fruit and Palm Kernel Oil (PKO) is produced by extracting the oil from the internal seed (Kernel). The oil palm produces bunches containing a large number of fruits with the fleshy mesocarp enclosing a kernel that is covered by a very hard shell. The oil extraction rate from a bunch varies from 17 to 27% for palm oil, and from 4 to 10% for palm kernels.

Palm oil has many useful properties. It is semi-solid at room temperature and so does not need to be chemically hardened. It is also neutral in taste and very stable when heated; it has a long shelf life and makes foods particularly spreadable. On account of these properties, palm oil is used in products as diverse as margarine, convenience foods, baked goods, and confectionery, as well as in the manufacture of candles, cosmetics, soaps, and detergents. Because of these unique natural characteristics, it is very difficult to find substitutes for palm oil.

Production of Palm Oil: The world’s largest producers of palm oil are Malaysia and Indonesia. According to the United States Department of Agriculture (USDA, 2016), global production of palm oil in 2015 totaled almost 59 million tonnes – of which just over 20 percent was from sustainable production. This required 17 million hectares of land or roughly 1.2 percent of all the world’s farmland. After Indonesia and Malaysia, which supply about 85 percent of the palm oil on the world market, the largest producers of palm oil are Thailand, Colombia, and Nigeria. According to FAO forecasts by 2020, the global demand for palm oil will double, and the triple by 2050.