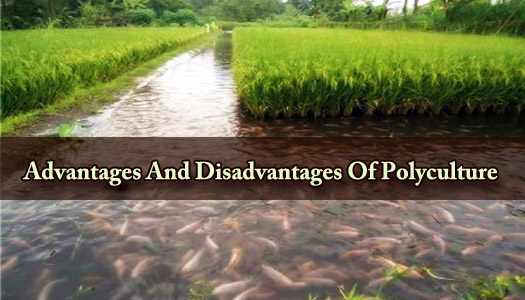 Advantages And Disadvantages Of Polyculture

Polyculture is the opposite of monoculture, in which only members of one plant or animal species are cultivated together. Polyculture has traditionally been the most prevalent form of agriculture in most parts of the world and is growing in popularity today due to its environmental and health benefits. There are many types of polyculture including annual polycultures such as intercropping and cover cropping, permaculture, and integrated aquaculture.

Polyculture is advantageous because of its ability to control pests, weeds, and disease without major chemical inputs. As such, polyculture is considered a sustainable form of agriculture. However, issues with crop yield and biological competition have caused many modern major industrial food producers to continue to rely on monoculture instead.

This agricultural method has many benefits, as well as downsides when it is applied.

Saving on Resources – Before polyculture, most farming was a monoculture, meaning one plot of land was dedicated to one crop. For example, corn would only grow with corn crops and tomatoes would only grow within a tomato crop. The problem with this system is a farmer would often need large amounts of land to separate the crops. The farmer would also need a much more complex irrigation system to feed crops water over a larger span of land. With polyculture, one plot of land has all the crops in one place. A farmer can have a smaller unit of land with the same output of crops and have a more efficient irrigation system.

Plant Competition – When soil is used for multiple crops, plants tend to grow stronger. This might seem counter-intuitive since it could be argued that nutrients are being eaten up faster by more plants. But the plants engage in a sort of competition over the soil. The roots of plants and vegetables tend to grow thicker and out more, trying to incorporate as much soil as possible. This allows the plants to grow more and give out a higher yield. With more plants near each other, the immune systems for the plants also increase. Studies have shown that plants that grow near other species of plants are able to fight off bacteria quicker than plants in monoculture land plots.

Human health – The chemicals used in monoculture food production can be directly harmful to human health when released into the environment. Nitrogen is a chemical found in especially high concentrations in fertilizers. Nitrates from these fertilizers often become integrated in water sources due to agricultural runoff. The consumption of nitrates at high doses has been shown to lead to methemoglobinemia in infants.

Many of the crops consumed today are calorie-rich crops as well which can lead to illnesses such as obesity, hypertension, and type II diabetes. Because it encourages plant diversity, polyculture can help increase diet diversity by incorporating non-traditional foods into agriculture and people’s diets.

The effects of interspecific competition and intraspecific competition can cause great damage to plants in certain polycultures. In order for a polyculture to be effective, the diverse species that are a part of it must have distinct biological needs such as absorbing different nutrients or requiring different amounts of sunlight as stated by the competitive exclusion principle. Due to the large number of plant species that are cultivated by humans, finding and testing combinations of plants where interspecific and intraspecific competition do not significantly negatively affect the individual plants is extremely difficult. As such, for crops where historic polycultures do not exist, such a multiplicity makes the creation of new polycultures a significant issue.

The central downside of polyculture is the number of control issues a farmer has over the crops. Unlike a single plot of land where one crop would grow, polyculture has one plot of land where multiple plants could grow. The result, however, is that the farmer must work in a more compact space with multiple types of plants growing at once. A farmer could only have one tomato patch as a monoculture and know how to work with that one monoculture well. But, with one plot of land that is a polyculture, the farmer must deal with the special needs of each plant within the single land plot.