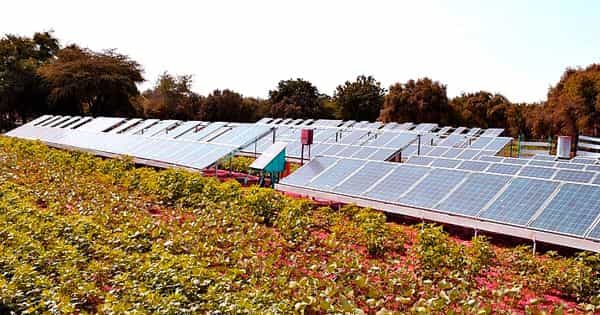 Agrivoltaics – an agricultural use of land

Agrivoltaics combines the agricultural use of land with the production of electric energy by photovoltaics. It also is known as agrophotovoltaics (APV) is co-developing the same area of land for both solar photovoltaic power as well as for agriculture. It also referred to as solar sharing, which is an idea that has been on the rise in recent years, but few studies have checked all aspects of the associated food, energy, and water systems. It provides solutions for the production of food crops and, at the same time, electricity generation under consideration of soil protection and water savings.

Agrivoltaics is a perfect combination of solar panels and plants on farmland. It provides solutions for the production of food crops and electricity generation.

Agrivoltaic systems could help, not only for the crops but also for farm labor. It’s a new way of combining renewable energy with agriculture in a hot, arid landscape, positioning elevated solar panels over an understory of plants. They work in the heat, which can cause heat strokes. The time has come to connect the scientific community and promote international exchange to advance systems and technology. Agrivoltaic systems can help diminish heat and maintain humidity. 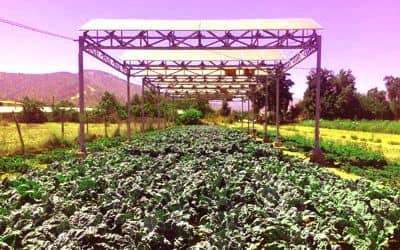 This technique was originally conceived by Adolf Goetzberger and Armin Zastrow in 1981. While impacts varied by plant type, the researchers found that the agrivoltaic systems held promising implications for food production, water savings, and renewable energy production. Agrivoltaics work best for plants that grow well in partial shade. Potential functioning crops include hog peanut, alfalfa, yam, taro, cassava, sweet potato, along with lettuce. The reduction in direct sunlight exposure beneath the PV panels led to cooler air temperatures during the day and warmer temperatures at night, which allowed the plants under the solar arrays to retain more moisture than the control crops that grew in open-sky planting areas. The reason that agrivoltaics technology is so beneficial to farmers, is because they can farm and use the same space to generate money from solar production

Agrivoltaics is a perfect combination of solar panels and plants on farmland. The coexistence of solar panels and crops implies a sharing of light between these two types of production. Sheep and several crops can benefit from these systems, including fruit production. Agrivoltaics involves combining crops with photovoltaic panels, installed with enough height to allow farm machinery to pass underneath. However, the combination of farming and solar power generation pays for themselves in approximately eight years, and pay off together in the long run.