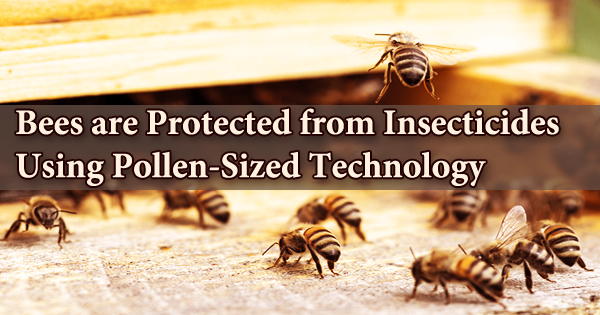 A Cornell University-developed device provides an antidote for lethal chemicals, which kill wild bees and cause beekeepers to lose about a third of their hives every year on average.

Recent research, “Pollen-Inspired Enzymatic Microparticles to Reduce Organophosphate Toxicity in Managed Pollinators,” published in Nature Food, describes an early version of the technique that detoxified a common class of pesticides known as organophosphates. The antidote delivery mechanism has now been developed to efficiently protect bees against all pesticides, leading to the formation of Beemmunity, a new firm located in New York state.

Insecticides can be categorized in a variety of ways, including by their chemical, toxicological effect, and method of penetration. They are categorized in the latter system based on whether they operate by ingestion (stomach poisons), inhalation (fumigants), or penetration of the body covering (contact poisons).

Most synthetic insecticides, on the other hand, penetrate across all three of these routes, allowing them to be differentiated from one another by their fundamental chemistry. Aside from synthetic insecticides, several organic and inorganic chemicals found naturally in plants can be effective insecticides; some of these are allowed in organic agricultural applications. The majority of pesticides are sprayed or dusted on plants and other surfaces that insects pass through or feed on.

According to studies, 98 percent of hives in the United States are polluted with an average of six chemicals, lowering a bee’s defense against varroa mites and diseases. Pollinators, on the other hand, perform critical services by aiding in the fertilization of crops that result in the creation of a third of the food humans consume, according to the research.

“We have a solution whereby beekeepers can feed their bees our microparticle products in pollen patties or in a sugar syrup, and it allows them to detoxify the hive of any pesticides that they might find,” said James Webb, a co-author of the paper and CEO of Beemmunity.

Jing Chen is a postdoctoral researcher in the lab of senior author Minglin Ma, an associate professor in the College of Agriculture and Life Sciences’ Department of Biological and Environmental Engineering (CALS). A co-author is Scott McArt, an assistant professor of entomology at CALS.

Organophosphate-based pesticides make up roughly a third of all insecticides on the market, according to the study. According to McArt, a recent global meta-analysis of in-hive pesticide residue studies revealed that five pesticides posed significant hazards to bees under current use patterns, two of which were organophosphates.

The researchers created a pollen-sized microparticle that contains enzymes that detoxify organophosphate pesticides before they are ingested and cause damage to bees. The enzymes are protected by the particle’s protective coating, which permits them to pass through the bee’s crop (stomach), which is acidic and breaks down enzymes.

Microparticles can be combined with pollen patties or sugar water, and once consumed, the enzymes are protected while they transit through the acidic crop to the midgut, where digestion and absorption of toxins and nutrients occur. The enzymes can then work to degrade and detoxify the organophosphates.

The method was tested on real bees in the lab after a series of in vitro trials. They gave a colony of bees tainted pollen laced with malathion, an organophosphate insecticide, as well as enzyme-enhanced microparticles. A control group was administered harmful pollen without the enzyme-filled microparticles at the same time.

After being exposed to malathion, bees given the microparticles with a high dosage of the enzyme had a 100% survival rate. Unprotected control bees, on the other hand, perished in a matter of days. Instead of loading the microparticles with enzymes that break down an insecticide, Beemmunity gives them a shell composed of insect proteins and fills them with a unique absorptive oil, forming a micro-sponge.

Because many pesticides, including the commonly used neonicotinoids, are intended to target insect proteins, the microparticle shell attracts the insecticide, which is then trapped inactive within the casing. The bees eventually excrete the poison that has been sequestered.

This summer, the firm is conducting colony-scale testing on 240 hives in New Jersey, with a public debut planned for February 2022. Consumer bee feeders are in development, as are microparticle sponges in a dry sugar medium that may be added to pollen patties or sugar water.

“This is a low-cost, scalable solution which we hope will be a first step to address the insecticide toxicity issue and contribute to the protection of managed pollinators,” Ma said.