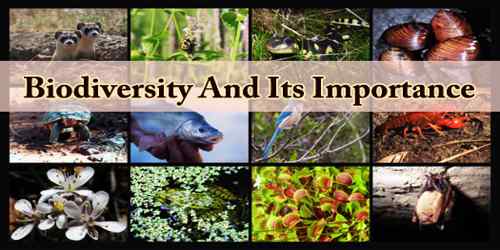 Biodiversity And Its Importance

Biodiversity or Biological diversity is typically a measure of variation at the genetic, species, and ecosystem levels. It is a term that describes the variety of living beings on earth. In short, it is described as a degree of variation of life. Biological diversity encompasses microorganisms, plants, animals, and ecosystems such as coral reefs, forests, rainforests, deserts, etc.

Biodiversity also refers to the number or abundance of different species living within a particular region. It represents the wealth of biological resources available to us. It’s all about sustaining the natural area made up of a community of plants, animals, and other living things that is begin reduced at a steady rate as we plan human activities that are being reduced by habitat destruction.

Biodiversity is not distributed evenly on Earth and is the richest in the tropics. These tropical forest ecosystems cover less than 10 percent of the earth’s surface and contain about 90 percent of the world’s species. Marine biodiversity is usually highest along coasts in the Western Pacific, where sea surface temperature is highest, and in the mid-latitudinal band in all oceans. There are latitudinal gradients in species diversity. Biodiversity generally tends to cluster in hotspots, and has been increasing through time, but will be likely to slow in the future.

Climatic changes, pollution level, vegetation structure, and composition, etc. are key factors participating in the structure and function of such a system. The adaptability of the certain species is a remarkable characters important quality of the species which support them to live in specific climatic condition and also playing role in survival of the species. Species variation is determined by the effect of gene activity and regulated by the presence of environmental facilities available for the species, group of the same species or by the association of individual species forming a population structure. Its occurrence, Density, and dispersal are variable components.

Each species has a unique life pattern and growth power in their natural habitat is known as their biotic potential. Better climatic condition supports the biotic potential of the species whereas the adverse condition of the environment becomes dangerous for growth and development of the certain species. Population structure is changeable according to the changes in climates. So, the variations in life forms are essential for successful regulation of the ecosystem and are also remarkable for their valuation in multifold directions.

The Importance of Biodiversity –

In the last 100 years average global temperature has increased by 0.74°C, rainfall patterns have changed and the frequency of extreme events increased. Change has not been uniform on either a spatial or temporal scale and the range of change, in terms of climate and weather, has also been variable.

Change in climate has consequences on the biophysical environment such as changes in the start and length of the seasons, glacial retreat, and a decrease in Arctic sea ice extent and a rise in sea level. These changes have already had an observable impact on biodiversity at the species level, in terms of phenology, distribution & populations, and ecosystem level in terms of distribution, composition & function.

Biodiversity has a number of functions on the Earth. These are as follows:

Biodiversity includes organisms from Earth’s vastly different ecosystems, including deserts, rainforests, coral reefs, grasslands, tundra, and polar ice caps. Our biodiversity is very important to the well-being of our planet. Most cultures, at least at some time, have recognized the importance of conserving natural resources. Many still do, but many do not.

Finally, Biodiversity plays an important role in the presence, multiplication and existence of the biological species in nature which are its important components and key elements for a better and healthy environment. It also performs a role in the conservation of natural resources.