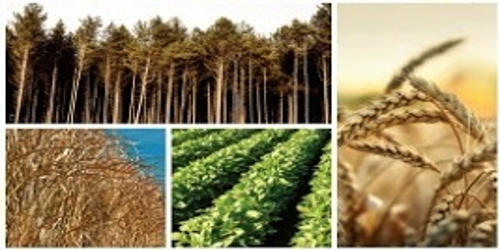 Energy crops are crops cultivated specifically to provide feedstock for energy industries. These are low-cost and low-maintenance crops grown solely for energy production by combustion (not for food). The crops are processed into solid, liquid, or gaseous fuels, such as pellets, bioethanol, or biogas. As biomass is a renewable fuel, besides its present availability, one must consider the annual yield, which is the amount of biomass grown in a year. The fuels are burned to generate electrical power or heat.

The plants are generally categorized as woody or herbaceous. For perennial species like trees that do not die every year, it is the annual growth in the plant gives the annual yield. Woody plants include willow and poplar, herbaceous plants include Miscanthus x giganteus and Pennisetum purpureum (both known as elephant grass).  Woody energy crops (also referred to as short-rotation woody crops), mainly consist of fast-growing hardwood tree species that are harvested within five to eight years of planting. Herbaceous crops, while physically smaller than trees, store roughly twice the amount of CO2 (in the form of carbon) below ground, compared to woody crops. The other important parameter that influences the cost is the heating value of the fuel and the fraction of the total biomass available for energy production. Urban residents can also contribute to biogas production by growing rooftop or vertical gardens in their homes. Waste from tomatoes, beans, and other vegetables is an excellent source of biogas material. Rural farms that are further away from the electric grid can create their own sources of energy through biogas production from agriculture wastes as well.

Energy crops can provide a biomass plant with an assured supply of feedstock over its lifetime and as such, it is getting much attention as a commercial source of energy. If energy crop deployment is limited to historical rates for the most rapidly expanding crops, without compensating increases in biomass yield, the amount of carbon removal will also fall. Through biotechnological procedures such as genetic modification, plants can be manipulated to create higher yields. Energy crops can also improve water quality because of plant absorption. Relatively high yields can also be realized with existing cultivars. Crops grown in otherwise open fields reduce the volume of water runoff which makes it to lakes, streams, and riversHowever, some additional advantages such as reduced associated costs (i.e. costs during the manufacturing process) and less water use can only be accomplished by using genetically modified crops.