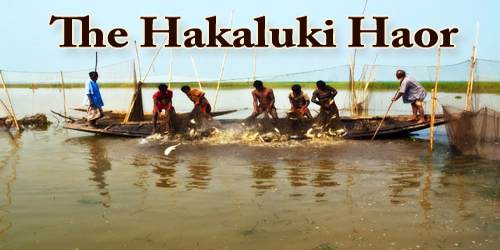 Hakaluki Haor: A rich hub of biodiversity and livelihood

Bangladesh is blessed with huge inland open water resources. It has numerous river canals, beels, lakes, and vast areas of floodplains. Hakaluki haor (Bengali: হাকালুকি হাওর) is one of the major wetlands of Bangladesh. With a land area of 18,386 hectares, it supports a rich biodiversity and provides direct and indirect livelihood benefits to nearly 190,000 people. This haor was declared an Ecologically Critical Area in April 1999 by the government of Bangladesh.

Hakaluki Haor is bounded by the Kushiara river as well as a part of the Sonai-Bardal river to the north, by the Fenchuganj-Kulaura railway to the west and to the south, and by the Kulaura-Beanibazar road to the east. The haor falls under two administrative districts, Maulvibazar and Sylhet. Some 190,000 people live in the area surrounding the haor. It lies between 24°35’ N to 24°44’ N and 92°00’ E to 92°08’ E.

Hakaluki Haor is an important source of fisheries resources for Bangladesh. Kalibaus, Boal, Rui, Ghagot, Pabda, and Chapila are the main fish species found here. From the Kushiara there are frequent upstream movements of fish towards the beels and tributaries of Hakaluki. The beels in Hakaluki haor provide winter shelter for the mother fisheries. In early monsoon, these mother fisheries produce millions of fries for the entire downstream fishing communities. Floodplains are also an important source of fisheries resources within the area.

However, many of the beets have lost their capacity to provide shelter for mother fisheries because of sand deposits from upstream rivers and canals, use of complete dewatering technique for fishing and lack of aquatic plants to provide feed and shelter for parent fish.

The surface area of Hakaluki Haor is 181.15 km2, of which 72.46 km2 (40.01%) is within the territory of Barlekha Upazila. It is also under Kulaura Juri Upazila of Moulvibazar District and Golapganj, Fenchuganj Upazila of Sylhet District.

The Haor is a very important resting place for migratory waterfowls flying in from the north. The most interesting species is the Barheaded Goose, which is now hardly seen in freshwater wetlands. Many other important species of waterfowls make the Haor their temporary home. Unfortunately, illegal poaching has been a threat to the waterfowl population in this vast wetland. Hakaltiki haor is known as good grazing land in winter. People from villages around the Haor and also from distant areas send their herds for grazing. During this time, herders make temporary shelters near the beels and graze their animals for a period of 4-5 months. The Haor had, very dense swamp forests in the past, but deforestation and a lack of conservation practices have virtually destroyed this unique forest in the last two decades.

Two small patches of swamp forests still exist in the area of which one is in Chatla beel and the other near the village of Kalikrishnapur. With the exception of these two swamp forest patches, the vegetation surrounding Hakaluki haor is unique. It includes both swamp forests as well as mixed evergreen rain forests. Thatching material is the most useful natural wetland product of the area.

The haor system provides a wide range of economic and non-economic benefits to the local people as well as to the people of Bangladesh. These include fish production, rice production, cattle, and buffalo rearing, duck rearing, collection of reeds and grasses, and collection of aquatic and other plants. The haor system also protects the lower floodplains from flash floods occurring in the months of April-May, maintains the supply of fish in other lower water bodies and provides habitat for migratory and local waterfowls.

The unique haor system contributes to the beauty of the landscape both during the monsoon and the dry season. In monsoon, its unique scenic beauty makes it a huge natural- bowl of water and in the dry season, it becomes a vast green grassland with pockets of beels serving as resting places for migratory birds. This unique natural system can be a major attraction for tourists.