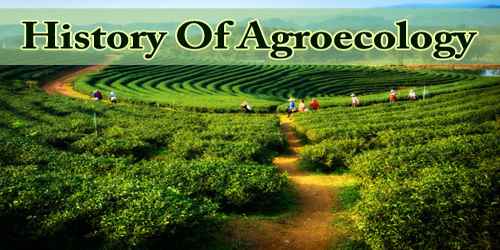 Agroecology (a-grō-ē-ˈkä-lə-jē) is farming that “centers on food production that makes the best use of nature’s goods and services while not damaging these resources.” It is the study of ecological processes applied to agricultural production systems. Bringing ecological principles into agroecosystems could suggest novel management approaches that would not be considered otherwise.

Agroecology encompasses the relationship between agricultural production systems and ecological processes. It includes all the techniques that allow agricultural practices to be more respectful of the environment and its ecological specificities. It is an interdisciplinary combination of agronomy, agriculture, scientific ecology, economics, and social sciences. It integrates practices such as organic farming, regenerative agriculture, some aspects of permaculture and therefore contributes to sustainable development.

Agroecology proposes a context- or site-specific manner of studying agroecosystems, and as such, it recognizes that there is no universal formula or recipe for the success and maximum well-being of an agroecosystem.

The term is often used imprecisely. Agroecology is defined by the OECD as “the study of the relation of agricultural crops and environment.” Dalgaard et al. refer to agroecology as the study of the interactions between plants, animals, humans, and the environment within agricultural systems. Francis et al. also use the definition in the same way, but thought it should be restricted to growing food.

The term agroecology first appeared in 1928 under the pen of American agronomist Basil Bensin. His understanding of agroecology then referred exclusively to the application of methods of ecology to the processes of agronomic research.

This idea grew progressively during the 1960s, 1970s, and 1980s. By then, the notion of agro-ecosystem started to transform into the idea of an ecosystem modified by human activity for exploitation purposes.

According to Gliessman and Francis et al., agronomy and ecology were first linked with the study of crop ecology by Klages in 1928. This work is a study of where crops can best be grown.

Wezel et al. say the first mention of the term agroecology was in 1928, with the publication of the term by Basil Bensin. Dalgaard et al. claim the German zoologist Friederichs was the first to use the name in 1930 in his book on the zoology of agriculture and forestry, followed by American crop physiologist Hansen in 1939, both using the word for the application of ecology within agriculture.

Gliessman describes that post-WWII ecologists gave more focus to experiments in the natural environment, while agronomists dedicated their attention to the cultivated systems in agriculture, but in the 1970s agronomists saw the value of ecology, and ecologists began to use the agricultural systems as study plots, studies in agroecology grew more rapidly. More books and articles using the concept of agroecosystems and the word agroecology started to appear in the 1970s. According to Dalgaard et al., it probably was the concept of “process ecology” such as studied by Arthur Tansley in the 1930s which inspired Harper’s 1974 concept of agroecosystems, which they consider the foundation of modern agroecology. Dalgaard et al. claim Frederic Clements’s investigations on ecology using social sciences, community ecology and a “landscape perspective” is agroecology, as well as Henry Gleason’s investigations of the population ecology of plants using different scientific disciplines. Ethnobotanist Efraim Hernandez X.’s work on traditional knowledge in Mexico in the 1970s led to new education programs in agroecology.

In the 1990s and 2000s, agro-ecology became much more global. Agro-ecosystems are now used to understand and define the entire system of production, distribution, and consumption of food resources, in all its components (agricultural, agronomic, economic, environmental, and social).

Several social movements have adopted agroecology as part of their larger organizing strategy. Groups like la Via Campesina have used agroecology as a method for achieving food sovereignty. Agroecology has also been utilized by farmers to resist global agricultural development patterns associated with the green revolution.

Agroecology is also defined differently according to geographic location. In the global south, the term often carries overtly political connotations. Such political definitions of the term usually ascribe to it the goals of social and economic justice; special attention, in this case, is often paid to the traditional farming knowledge of indigenous populations. North American and European uses of the term sometimes avoid the inclusion of such overtly political goals. In these cases, agroecology is seen more strictly as a scientific discipline with less specific social goals.