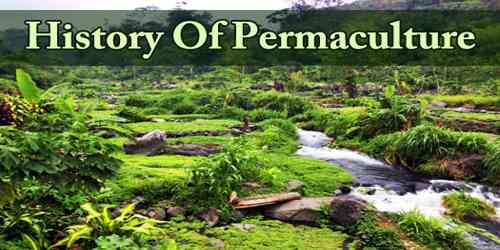 Permaculture is a process, continually rethought and built upon. It does not belong to anyone person or rely on one charismatic leader. However, certain insightful individuals are important to the history of permaculture and to the future of the movement. This list is far from complete and will continue to grow as new names innovate with permaculture principles.

The term permaculture was coined by David Holmgren, then a graduate student at the Tasmanian College of Advanced Education’s Department of Environmental Design, and Bill Mollison, senior lecturer in Environmental Psychology at the University of Tasmania, in 1978. It originally meant “permanent agriculture”, but was expanded to stand also for “permanent culture”, since social aspects were integral to a truly sustainable system as inspired by Masanobu Fukuoka’s natural farming philosophy.

In the 1970’s Mollison and his student David Holmgren wrote and published some books explaining his ideas. In the 1980s he published his design manual and started teaching permaculture design courses to spread his ideas around the world. By the 1990s permaculture had started spreading throughout the US, although it’s more well-known in other countries around the world. To this day, it’s continuing to grow as a global grassroots movement and people primarily learn about it through permaculture design courses and workshops that generally happen outside of academia.

David Holmgren is best known for his influential work, Permaculture: Principles and Pathways Beyond Sustainability (2002). Unlike many permaculture books that focus primarily on agricultural design, Holmgren’s book is an in-depth look at how sustainable systems function and how we can apply these lessons to our current culture. His theories are firmly rooted in the understanding that we are reaching peak energy. Holmgren lays out a system for us to live and thrive within nature’s limits.

Several individuals revolutionized the branch of permaculture. In 1929, Joseph Russell Smith added an antecedent term as the subtitle for Tree Crops: A Permanent Agriculture, a book which sums up his long experience experimenting with fruits and nuts as crops for human food and animal feed. Smith saw the world as an inter-related whole and suggested mixed systems of trees and crops underneath. This book inspired many individuals intent on making agriculture more sustainable, such as Toyohiko Kagawa who pioneered forest farming in Japan in the 1930s.

In Australian P. A. Yeomans’ 1964 book Water for Every Farm, he supports the definition of permanent agriculture, as one that can be sustained indefinitely. Yeomans introduced both an observation-based approach to land use in Australia in the 1940s and the Keyline Design as a way of managing the supply and distribution of water in the 1950s.

Holmgren noted Stewart Brand’s works as an early influence to permaculture. Other early influences include Ruth Stout and Esther Deans, who pioneered no-dig gardening, and Masanobu Fukuoka who, in the late 1930s in Japan, began advocating no-till orchards and gardens and natural farming.

The definition of permanent agriculture as that which can be sustained indefinitely was supported by Australian P. A. Yeomans in his 1964 book Water for Every Farm. Yeomans introduced an observation-based approach to land use in Australia in the 1940s and the keyline design as a way of managing the supply and distribution of water in the 1950s.

Among some of the more recognizable names who received their original training within Mollison’s Permaculture Design Course (PDC) system would include Geoff Lawton and Toby Hemenway, each of whom have more than 25 years experience teaching and promoting permaculture as a sustainable way of growing food and providing for human needs. Simon J. Fjell was a Founding Director of the Permaculture Institute in late 1979 and a teacher of the first Permaculture Design Course, having first met Mollison in 1976. He has since worked internationally and is currently listing a major social enterprise on NASDAQ.

By the early 1980s, the concept had broadened from agricultural systems design towards sustainable human habitats. After Permaculture One, Mollison further refined and developed the ideas by designing hundreds of permaculture sites and writing more detailed books, notably Permaculture: A Designers Manual. Mollison lectured in over 80 countries and taught his two-week Permaculture Design Course (PDC) to many hundreds of students. Mollison “encouraged graduates to become teachers themselves and set up their own institutes and demonstration sites. This multiplier effect was critical to permaculture’s rapid expansion.”