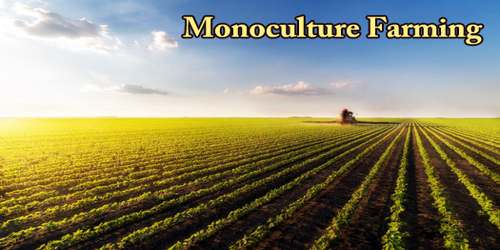 In agriculture, “Monoculture Farming” is a relatively new technique, and it is now the basis for most of our agriculture. Really, it is nothing more than the practice of intensively growing a single crop within a specific area. This is completely at odds with the traditional method of farming, which allowed the growing of multiple crops. It also entails a farming or agricultural production system that is practiced at a single time. It has been used in industrial farming and organic farming, allowing for increased efficiency in planting and harvesting, as well as lowering costs for farmers.

Monoculture, widely used both in industrial farming and in organic farming, has allowed increased efficiency in planting and harvesting while simultaneously increasing the risk of exposure to diseases or pests. This is a cheap way of duplicating produce. Continuous monoculture, or monocropping, where agriculturalists raise the same species year after year, can lead to the quicker buildup of pests and diseases, and then their rapid spread where a uniform crop is susceptible to a pathogen. Monocultures of perennials, such as African palm oil, sugar cane, and pines, can lead to environmental problems. Diversity can be added both in time, as with crop rotation or sequence, or in space, with a polyculture. Many examples of monoculture farming can be found today. Corn and soy production are both very common, and most farms will “specialize” in one plant type.

The term “oligoculture” has been used to describe a crop rotation of just a few crops, as practiced in several regions of the world. The concept of monoculture can also extend to (for example) discussions of variety in urban landscapes.

Examples of monoculture crops include corn, wheat, rice, clover, cotton. It also includes tea, coffee, different types of fruits, and rubber trees. Experts are of the view that monoculture farming is more of a curse than boon, particularly after the Irish Potato Famine of 1845. Along with its added benefits over traditional farming, it comes with its own set of dangers and risks. Let us take a closer look at each of them.

Today, Monoculture is very popular not only in an industrialized agricultural area but also in the organic agricultural field. But instead of its growing popularity, some risks are there in bringing this practice into action.

In crop monocultures, each plant in a field has the same standardized planting, maintenance and harvesting requirements resulting in greater yields and lower costs. When a crop is matched to its well-managed environment, a monoculture can produce higher yields than a polyculture. In the last 40 years, modern practices such as monoculture planting and the use of synthesized fertilizers have reduced the amount of additional land needed to produce food.

The problem with monoculture farming is that it eliminates biological controls provided by mixed crop gardening, and it also causes soil degradation. In a traditional farm, different plant species require different levels of nutrients, and many also replace depleted nutrients.

Within a monoculture system, depleted nutrients must be replaced through the application of fertilizers instead. Because plants are more susceptible to pests in this type of farming, significant amounts of pesticides must also be applied.

Monoculture farming also hurts biodiversity. For instance, growing biologically identical plants can create problems when the environmental conditions in a particular area change. Because plants are not allowed to adapt naturally to those changes, it can result in widespread crop failure.

Potato farming in Ireland – The most significant case of monocultural farming is in Ireland. In the 1840s, there was substantial farming of the ‘lumper,’ a variety of potato that was grown monoculturally. The lumpers were inexpensive food used to feed the Irish people. The potato variety was propagated vegetatively with no genetic variation.

Unfortunately, a potato blight known as the Phytophthora infestans arrived in the country from the Americas, the lumper was hardest hit. It had no resistance to the disease, and as a result, nearly all the potato crops in Ireland completely failed.

Cattle rearing in the US – Modern-day livestock production systems rely on a handful of highly specialized breeds. Monoculturally reared cows are at the risk of lacking desirable traits like fertility, vigor, and resistance to diseases. Many of them end up dying as they do not have the genes that can prevent certain conditions.

A single bull widely used in monocultural farming might be a carrier of a gene mutation that could cause diseases. Such an issue arose in 1990 in the United States, with approximately 600,000 out of 4 million Holstein cattle affected.

Forestry – In forestry, monoculture relates to the planting of a unique species of trees. It provides more yields and more efficient harvesting. Monoculture stands of trees are planted and later harvested as a unit. It can be considered a risky venture because, for starters, there is no diversity in the sizes of the trees, where you would find mature and young trees together.

Secondly, since they are all the same size, they have limited openings and are therefore more prone to wildfires. It also puts all the trees at considerable risk of pathogen and insect attacks as well as adverse environmental conditions.

Banana farming in the US – Almost all of the bananas consumed in the United States in the 1950s were grown monoculturally. The farming was practiced as it was efficient, produced bananas with small seeds and those that were tastier. Unfortunately, the tiny seeds meant they were not suitable for planting, resulting in all-new bananas being grown from the cut suckers of another plant.

The asexual form of growing them resulted in bananas that were identical with a similar genetic makeup, leading to them lacking resistance to fungal diseases. By the 1960s, farmers had to switch to a different form of banana cultivated in the same way as the former, meaning diseases could also attack them as their predecessors.

Cultivation of beans in Central America – Farmers, especially in Nicaragua, fell trees to make space for more land to cultivate beans. By destroying the forests, rains become inconsistent, then come extended periods of a dry spell eventually affecting the quality and quantity of the produce.

Large scale production of Corn – The practice of corn farming for commercial purposes is very popular across various nations in the world including Brazil, in the U.S. states like South Dakota, Ohio, Lowa, and Nebraska, and in sub-Saharan African countries where Maize is grown as a staple food. Thousands of acres of land are often dedicated to the growth of corn in these regions.

If the process of Monoculture is continuous, farmers tend to raise similar species of the plant every year. So, this action leads them to the rapid enlargement of diseases and pests and leads the uniformed crop to the pathogens.

There are also some types of Monoculture, which are perennials. Sugar cane, African palm oil, and pines are some of them. Sometimes, this causes problems for the whole atmosphere and also for the human being. On the other hand, with the help of polyculture, we can add a diversity which helps in crop rotation.

Solutions like polyculture, crop rotations, biotech crops might solve some issues, but again, there are some pros and cons related to them also. Researchers state that the trouble connected to monoculture farming is far more complex and grave to solve.