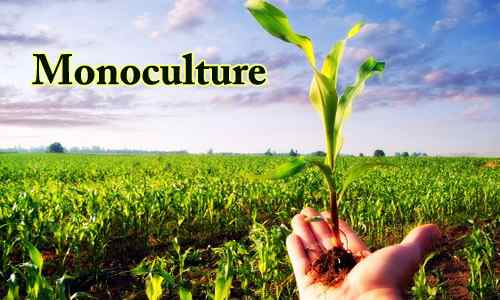 In agriculture, monoculture is the practice of producing or growing a single crop, plant, or livestock species, variety, or breed in a field or farming system at a time. Polyculture, where more than one crop is grown in the same space at the same time, is the alternative to monoculture. Monocultures are very simple farming and agricultural systems. It primarily involves soil preparation, irrigation, and the input of chemicals where needed all focused on the preferences of one particular plant species. As such, the fields are significantly specialized towards the maximum production of yields from the specific crop. Monoculture, widely used both in industrial farming and in organic farming, has allowed increased efficiency in planting and harvesting while simultaneously increasing the risk of exposure to diseases or pests. This is a cheap way of duplicating produce. Continuous monoculture, or monocropping, where agriculturalists raise the same species year after year, can lead to the quicker buildup of pests and diseases, and then their rapid spread where a uniform crop is susceptible to a pathogen. Monocultures of perennials, such as African palm oil, sugar cane, and pines, can lead to environmental problems. Diversity can be added both in time, as with crop rotation or sequence, or in space, with a polyculture. The most extreme form of monoculture involves the cultivation of a single genotype of a crop species, to the exclusion of other genotypes and other species. (Note that a single genotype would mean that all of the crop plants are genetically uniform.) Genetic monocultures may be grown in cases where plant breeders have managed to develop uniform strains of plants that are optimally adapted for growth under certain environmental conditions. To practice this extreme type of monoculture, it must be possible to propagate the desired genotype using non-sexual means, such as cuttings, root grafts, or tillers. Seeds, in comparison, are genetically variable, although in intensive agriculture they may be derived from relatively narrow, inbred strains of variable species.

In forestry, monoculture relates to the planting of a unique species of trees. It provides more yields and more efficient harvesting. Monoculture stands of trees are planted and later harvested as a unit. It can be considered a risky venture because, for starters, there is no diversity in the sizes of the trees, where we would find mature and young trees together. Secondly, since they are all the same size, they have limited openings and are therefore more prone to wildfires. It also puts all the trees at considerable risk of pathogen and insect attacks as well as adverse environmental conditions.