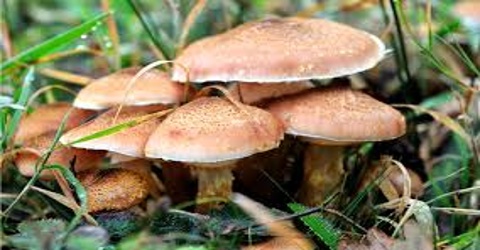 Mushroom and its Cultivation Process

A mushroom is the fleshy, spore-bearing fruiting body of a fungus, typically produced the climatic above ground on soil or on its food source. The standard for the name “mushroom” is the cultivated white button mushroom, Agarics Bosporus, hence the word mushroom is most often applied to fungi (Basidiomycota, Agaricomycetes) that have a stem (stripe), a cap (pileups), and gills (lamellae, sing. lamella) on the underside of the cap just as do store-bought white mushrooms. However, “mushroom” can also refer to a wide variety of gilled fungi, with or without stems, and the term is used even more generally to describe both the fleshy fruiting bodies of some Ascomycota and the woody or leathery fruiting bodies of some Basidiomycota, depending upon the context of the word. Most of the production of white button mushroom in our country is seasonal. The cultivation is done using conventional methods. Usually, un-pasteurized compost is used, hence yields are very low. However, in recent years, yield of mushroom has increased as a result of introduction of improved agronomic practices. Cultivation of the common white button mushroom requires technical skill. Apart from other factors, the system requires humidity, two different temperatures that is-

Substrates that are sterilized are easily contaminated unless spawned under very aseptic conditions. Therefore steaming at 1000 C (pasteurization) is more acceptable steamer.

Compost preparation: Agricultural by products like cereal straw (wheat, barley, paddy, oat and rice), maize stalks, hay, sugarcane baggage or any other cellulose wastes can be employed. Wheat straw should be freshly harvested, shining yellow in color and should not have been exposed to rains. The straw should be in about 5-8cm long pieces, otherwise heap prepared by long straw would be less compact which may lead to improper fermentation. Conversely; too short straw makes heap too compact to allow enough oxygen to enter the centre of the heap and lead to anaerobic fermentation. Wheat straw or any of the above materials provide cellulose, hemicelluloses and lignin, which are utilized by the mushroom mycelium as the carbon source. These materials also provide physical structure to the substrate needed to ensure proper aeration during composting for the build up of micro flora, which is essential for the fermentation. Rice and barley straw are very soft, degrade very quickly during composting and also absorb more water as compared to wheat straw. While using these substrates, care should, therefore, be taken on the quantity of water to be used, schedule of turnings and adjustment to the rate and type of supplements. Since the byproducts used in composting do not have adequate nitrogen and other components required for the fermentation process, compounding mixture is supplemented with the nitrogen and carbohydrates, to start this process. Spawning: Spawning is mixing of spawn in for optimum and timely yields. Optimum dose for spawn ranges between 0.5 and 0.75% of fresh weight of compost. Lower rates result in slow spread of mycelium and chances for diseases and competitors may increase. Higher rates may increase cost of spawning and very high rate of spawn sometimes results in unusual heating of compost.

Crop management after spawning: The optimum temperature for growth of A. Bosporus is 23 + – 20 C. Relative humidity in growing room should range from 85-90% during spawn-run.

Harvesting: Usually 3 to 4 days after opening the bags, mushroom primordial begin to form. Mature mushrooms become ready for harvesting in another 2 to 3 days. An average biological efficiency (fresh weight of mushrooms harvested divided by air-dry substrate weight x 100) can range between 80 to 150% and sometimes even more. To harvest the mushrooms, they are grasped by the stalk and gently twisted and pulled. A knife should not be used. The mushrooms remain fresh for up to 3 to 6 days in a refrigerator/cool place.

Before eating any mushroom, one have to properly identify the specie. Every year, hundreds of people become ill and some even die because they collect wild mushrooms and wrongly identify them. Eating cultivated mushrooms remains the safest way for selecting edible mushrooms.

Selecting the right type of mushrooms for cultivation

Most of the cultivated mushrooms are from the saprophyte group; there are about 5,000 known species but very few that can be cultivated economically. Select the most suitable type of mushrooms according to your environment and to market demand.

The relative size of the cap and stalk vary widely. Shown here is a species of Macrolepiota. The terms “ Mushroom” and  “ Toadstool” go back centuries and were never precisely definced nor was there consensus on application. The term “ toadstool” was often, but not exclusively, applied to  poisonous mushrooms translates as “ deaths” or to those that have the classic umbrella-like cap-and –stem form. Between 1400 and 1600 A.D. the terms tadstoles, frogstooled, frogge stoles, tadstooled, tode stoles, toodys hatte. The term “toadstool” is nowadays used in storytelling when referring to poisonous or suspect mushrooms. The classic example of a toadstool is Amanita muscaria.