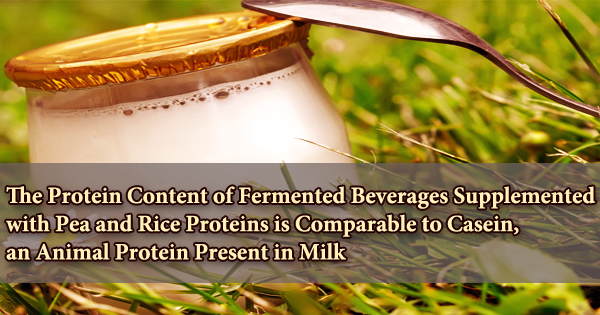 The Protein Content of Fermented Beverages Supplemented with Pea and Rice Proteins is Comparable to Casein, an Animal Protein Present in Milk

The majority of probiotic and protein-enriched products are manufactured with dairy products; nevertheless, consumer demand for plant protein is increasing. As a result, the nutritional value of these proteins must be increased to match that of animal proteins.

Probiotic drinks and other “functional beverages,” according to a new Beverage Industry study, are the trendiest bottled beverages to occupy space in your grocer’s refrigerator area. Benefits such as “detoxifying” and “energy-boosting” are frequently claimed on labels.

Professor Monique Lacroix of the INRS (Institut national de la recherche scientifique) has proven that fermenting beverages supplemented with pea and rice proteins provide the same grade of protein as casein, an animal protein present in milk. In the Journal of Food Science, the findings were published.

That said, plant proteins are also harder to digest. “They often are nonsoluble in water and under globular. As a result, our digestive enzymes have a harder time breaking them down. Animal proteins, on the other hand, are generally in the shape of elongated fibers that digestive enzymes can readily break down,” said Professor Lacroix.

Yogurt and other fermented dairy products such as kefir, naturally-aged cheeses such as Gouda, fermented soybean foods such as miso and tempeh, naturally fermented sour pickles, and cabbage such as sauerkraut and kimchi, sourdough bread, and the fermented beverage kombucha all contain probiotics. Because everyone’s microbiome is different, you may need to test a few different probiotic products before you discover one that works best for you.

Pea and rice proteins, on the other hand, can be predigested by lactic acid bacteria (LAB) when introduced before the fermentation stage during the creation of a fermented beverage. This enables the creation of peptides (protein fragments) as a result of protein breakdown during fermentation, allowing for easier absorption during digestion.

Protein may be found in all parts of the body, from the muscles and organs to the bones, skin, and hair. Protein is not stored in the body like other macronutrients, thus it must be obtained from the food. Amino acids are the building blocks of proteins. To operate properly, a person’s body needs a balance of all 22 kinds of amino acids.

Protein is made up of amino acids, which are the building blocks of the molecule. Proteins in meals are broken down into amino acids by the body during digestion. Various amino acids may be required by the organism at different periods. Many individuals think that complete protein sources, which comprise all nine necessary amino acids, should be included in the diet.

The study utilized a particular formulation comprising the microorganisms Lactobacillus acidophilus CL1285, Lactobacillus casei LBC80R, and Lactobacillus rhamnosus CLR2. These LAB were utilized in this study to make the fermented drink enhanced with pea and rice proteins, and their probiotic activities have been scientifically validated and licensed by Health Canada.

However, when animal by-products are incorporated in current commercial and experimental diets, both shows increased performance under a range of management and production techniques. Furthermore, animal proteins lack oligosaccharides and other non-starch polysaccharides, which have been proven to affect intestinal viscosity and limit fat and protein digestion.

However, the relationship between animal protein and cardiovascular disease was only discovered in those who had at least one lifestyle-related risk factor, such as smoking, high alcohol use, or being overweight or obese, according to the researchers. Another key element is fiber.

Fiber is only found in plant-based meals, and it helps to keep the digestive system in check. Keep in mind that having too much of a good thing isn’t necessarily a good thing. Probiotics can be good to our health if we eat a variety of foods and beverages containing probiotics, as well as taking supplements.