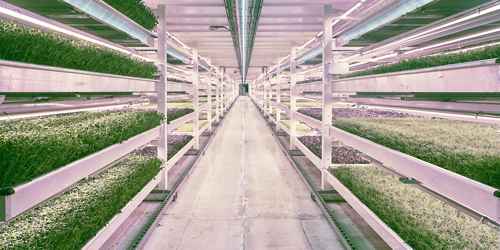 Vertical farming or high-rise farming is a proposed indoor, urban farming technology involving large-scale agricultural production in multi-story buildings. Vertical farming is the practice of growing produce in vertically stacked layers. The practice can use soil, hydroponic or aeroponic growing methods. Vertical farms attempt to produce food in challenging environments, like where arable land is rare or unavailable. It is an intensive farming strategy which mainly employs advanced techniques such as hydroponics and aeroponics to produce crops like fruits, vegetables and edible mushrooms continuously. It also includes the raising of livestock and fishes indoor. Vertical farming is a common method of growing produce in an indoor environment (e.g., a building or walk-in container) with carefully controlled conditions and lighting. Some vertical farms have conditions similar to greenhouses, using natural sunlight and primarily solar heating during the day. Other vertical farms are completely indoors, using artificial lighting and humidity and heating controls.

Lettuce, kale, and other forms of greens are the most common vegetables grown in vertical farms. Some crops like corn or grain just are not practical for this form of agriculture.

Vertical farming is more than producing food indoors in an urban landscape. It’s a proposed answer to the pending food crisis our world is facing. Despommier describes vertical farming as a system “in which a wide variety of produce is harvested in quantity enough to sustain even the largest of cities without significantly relying on resources beyond the city limits.”

In theory, these farms would be entirely self-sufficient, taking energy from the sun and wind, as well as composting spent plants to produce energy. Used water would even be recycled back into the system, saving more water for personal use. This system would not only grow crops year-round, but also raise livestock, such as poultry and pigs, to meet the needs of the growing urban population. Vertical farms come in different shapes and sizes, from simple two-level or wall-mounted systems to large warehouses several stories tall. But all vertical farms use one of three soil-free systems for providing nutrients to plants—hydroponic, aeroponic, or aquaponic.

Hydroponics. The predominant growing system used in vertical farms, hydroponics involves growing plants in nutrient solutions that are free of soil. The plant roots are submerged in the nutrient solution, which is frequently monitored and circulated to ensure that the correct chemical composition is maintained.

Aquaponics. An aquaponic system takes the hydroponic system one step further, combining plants and fish in the same ecosystem. Fish are grown in indoor ponds, producing nutrient-rich waste that is used as a feed source for the plants in the vertical farm. The plants, in turn, filter and purify the wastewater, which is recycled to the fish ponds.