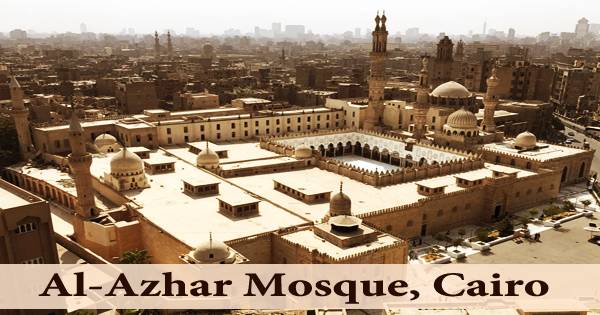 A visit to a historical place/building (Al-Azhar Mosque, Cairo)

The Fatimids built Al-Azhar Mosque (Arabic: الجامع الأزهر‎, romanized: al-Jāmiʿ al-ʾAzhar, lit. ’The Resplendent Congregational Mosque‘) in 970 AD as a mosque dedicated to both worship and learning, and it has since evolved into the world’s most prominent center of Islamic theology and study. In 972, the first khutba was delivered from its minbar, and in 988, a university was founded there. It was the first mosque built in Cairo, which has earned the moniker “City of a Thousand Minarets” since then. The product of multiple enlargements over more than 1000 years, the structure is a beautiful combination of architectural styles. The tomb room, accessible by a doorway on the left just inside the entryway, contains a lovely mihrab (a niche indicating the direction of Mecca) and should not be overlooked. Following the Egyptian Revolution of 1952, the university was nationalized and officially designated as an independent university. It had been integrated within the mosque as part of a mosque school since its beginnings. The original structure is a hypostyle mosque, with round arches on pre-Islamic marble columns (spolia) with Corinthian capitals defining the aisles, and a wide longitudinal aisle (transept) highlighting the axis to the mihrab, which is higher than the rest of the prayer hall. The other aisles go parallel to the qibla wall and are transverse. The mihrab, where the transept ends, is indicated with a dome. Al-Azhar University has been known for its pluralism from its inception. It was founded by the Ismaili Shi’i Fatimid Dynasty as a Sunni institution, but despite the tensions between these different theologies, Sunni and Shi’i scholars have collaborated, lectured, and debated together at Al-Azhar for the majority of its history. Today, al-Azhar is a highly powerful institution in Egyptian society, as well as a symbol of Islamic Egypt throughout the Sunni Muslim world.

Stucco panels and a window screen in the old qibla wall, as well as stucco depictions of a palm tree on the piers of the wall facing the original qibla wall, are among the original decorations. The oldest component is the central courtyard, while the three minarets that run from south to north are from the 14th, 15th, and 16th centuries; the latest, with its double finial, was erected by Sultan Al Ghouri, whose mosque and burial are adjacent. The Kufic inscriptions and stucco carving in the hood of the mihrab, as well as the stucco embellishments on the inside of the sanctuary’s northeast wall, include bands of Kufic inscriptions framing windows with geometric stucco grilles. The stucco panels above it, on the other hand, are from Sultan Baybars I’s restoration. The art and architecture of al-Azhar have been impacted by several Egyptian monarchs, from the Mamluk minarets and Ottoman gates to more contemporary modifications such as the installation of a new mihrab. None of the original minarets or domes remain, and some of the contemporary minarets have been rebuilt multiple times. The ancient mihrab, discovered in 1933, is topped by a semi-dome with marble columns on both sides. In AD 988, a madrassa was founded here, which grew into the world’s second-oldest educational institution, the University of Baghdad. The university was formerly one of the world’s most prestigious educational institutions, attracting students from all over the Islamic empire. The prestigious venue to study Sunni theology is still the vast modern campus (due east). A new wooden door was installed during the reign of al-Hakim in 1009. Al-Amir built a new wooden mihrab in 1125. During the reign of al-Hafiz li-Din Allah, an additional dome was built. He also had a fourth arcade made around the courtyard, as well as a porch added on the western end of the sahn. Three arches once encircled the area. The transept begins with a pishtaq, which is located in the prayer hall in front of the courtyard and was also completed during al-period. Hafiz’s A strip of white marble with an ornamental design inlaid in black surrounds the upper half of the mihrab. Mosques and madrasas were, in fact, arenas for Sufi performances, including dance and music, in the early 14th century. It is notably notable for its gateway, which is inlaid with red and black marble, and its mihrabs, which have glass mosaic and mother of pearl ornaments.