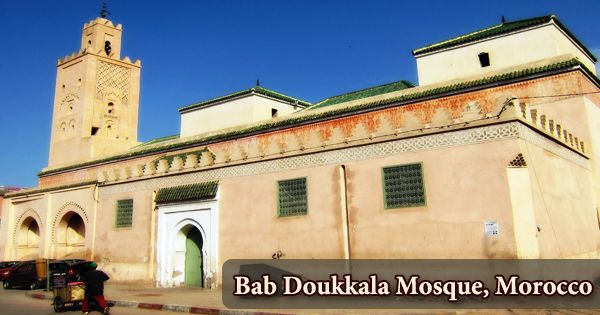 A visit to a historical place/building (Bab Doukkala Mosque, Morocco)

The Bab Doukkala Mosque, also known as the Mosque of Bab Doukkala, is a significant Friday mosque in Marrakesh, Morocco. The mosque is next to Riad La Maison Arabe and close to Medina. Lalla Mas’uda bint Ahmad, the mother of Ahmad al-Mansur Dahbi (r. 1578-1603 / 968-1012 AH), built it in 1558/965 AH. The mosque’s alternative name of Jami’ al-Hurra (“Mosque of Freedom”) may have come from Lalla Ma’suda’s position as a powerful and “free” or independent lady. It is called after Bab Doukkala, a neighboring city gate in the western city walls. The al-Hurra Mosque (or Mosque of the Free One, in honor of its creator, Massa’uda al-Wizkitiya) is another name for it. During the Saadian Dynasty, the mosque was commissioned by Lalla Mas’uda bint Ahmad, the daughter of Muhammad al-Sheikh (the founder of the Saadian Dynasty) and mother of Sultan Ahmad al-Mansur. The Bab Doukkala Mosque was designed as part of a larger religious and civic complex that featured a madrasa, library, hammam (public baths) with latrines, an ablutions house or mida’a (Arabic: ميضأة‎), and a public fountain for giving water to the inhabitants, in addition to the mosque itself. Although many Marinid-era mosques had associated amenities, this sort of enormous architectural complex was unheard of in Morocco, and may have been influenced by the Mamluk Egyptian and Ottoman Empire traditions of creating such complexes. The prayer hall is divided into eight naves by huge, ornate columns that support colossal arches.  The sahn is surrounded on three sides by five arch porticoes, with the minaret in the northwest corner. The minaret appears to have been constructed after the mosque had been completed. Xavier Salmon believes it was erected about the same time as the minaret of the Zawiya of Sidi Bel Abbes (built by Abu Faris Abdallah) around the beginning of the 17th century, based on its architecture. To the north of the colossal gateway, the main entry facade features three blind arches. Historian Gaston Deverdun claims that the mosque, mida’a, fountain, and hammam of this complex were all erected at the same time during the initial building, but the minaret, tiny neighboring madrasa (no longer preserved), and msid (Qur’anic school for children) previously bordering the mida’a were added later.

The mosque is home to a madrasa, hamam, and Qur’anic school. The mosque’s shape and layout are very similar to those of the Mouassine Mosque, which was constructed not long after it. Many of the architectural features of previous Almohad mosques such as the Kutubiyya Mosque and the Tinmal Mosque have been preserved. The courtyard is 29 meters long and 30 meters wide, with a fountain in the center. The mosque’s northeastern corner houses the minaret. Darj-wa-ktaf patterns and blind lambrequin arches adorn the building’s façades. The main aisle is a little broader than the others. This central aisle is aligned with the mosque’s mihrab (a niche in the southeastern wall that represents the qibla) and is crowned with a beautiful cupola at each end. The three lambrequin arches that encircle the mihrab, which are significantly more ornate than the others, have muqarnas within their intrados as well. A square-based muqarnas cupola stands at both ends of the transverse aisle, near the mosque’s southwestern and southeastern corners. The mihrab is decorated with carved stucco on the surface of the wall around its arched aperture, with different arabesque designs and a band of geometric motifs, as well as a Kufic inscription running in a square frame around the arch. The window’s arches have simple stucco ornamentation, and the column is constructed of marble with a muqarnas-carved capital. This feature can also be found at the Mouassine Mosque, however, the Mouassine Mosque’s bayt al-‘itikaf has significantly more elaborate embellishment. The wooden berchla or artesonado ceiling of the roofed pavilion above the courtyard’s water basin is especially noteworthy. On the façade of the mida’a structure is a richly decorated street fountain, a Saadian architectural style also visible in the Mouassine Fountain and the Shrob ou Shof Fountain, and with predecessors in the Almoravid-era Ben Youssef complex. The fountain, which is attached to the mida’a’s northeastern façade, is made up of three arched bays on the right with animal water troughs and a fourth bay on the left with a human water basin. The complex’s hammam (bathhouse) provided additional function to the residents of the neighborhood, allowing them to maintain personal cleanliness and complete the ghusl. It’s across the street from the mida’a to the southeast. It comprises of a changing room (where visitors first enter), a cold room, a warm room, and a hot room, similar to the Mouassine’s hammam and other Moroccan hammams in general. The former madrasa of the mosque was linked to the east side of the building (or to the northwest corner of the building) but has since been replaced by modern buildings. A modest Qur’anic school for children, known as a msid, was once placed on the east side of the fountain, in a chamber accessible only by a steep stairway, but it has since vanished.