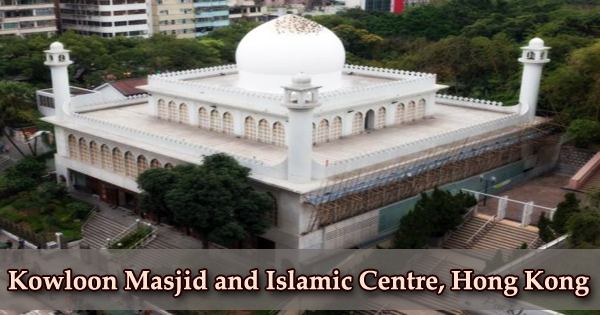 A visit to a historical place/building (Kowloon Masjid and Islamic Centre, Hong Kong)

The Kowloon Masjid and Islamic Centre (Chinese: 九龍清真寺暨伊斯蘭中心), also known as the Kowloon Mosque, is the second of Hong Kong’s five major mosques. This mosque, which is currently the largest in Hong Kong, is located in Kowloon, in the Tsim Sha Tsui region, at the intersection of Nathan Road and Haiphong Road, next to Kowloon Park. The Kowloon Mosque and Islamic Center is a large square structure with a pink roof and a dome on top. Although the architectural intricacy may be seen from above, the structure and detail of the building cannot be properly appreciated from the street level in front of it. The structure is a big structure with four spires that stands out due to its vibrant color and design. The mosque hosts five daily prayers and can accommodate up to 3,500 people. It was founded in 1896 by the Hong Kong Regiment on the current site of the Tsim Sha Tsui Police Station. It was built to serve the British Army’s Indian Muslim troops stationed nearby at Whitfield Barracks, which is now the location of Kowloon Park. I.M. Kadri, an architect, designed the structure. It has a capacity of 3,000 people at any given moment. The temple’s pavement and front are both composed of white marble, giving it an ethereal appearance. The building’s corners are marked by 11-meter-high minarets. There are prayer halls, a communal hall, a medical clinic, and a library in the structure. The main prayer hall has a seating capacity of 1,000 persons. On the second story, a pink patio surrounds the smaller women’s prayer space. A dome with a diameter of 5 meters and a height of 9 meters sits atop the structure. The structure developed structural concerns in the late 1970s as a result of underground work for the Mass Transit Railway. A new mosque was erected and opened on May 11, 1984, on the present site at 105 Nathan Road, with compensation paid by MTR Corporation and donations from the local Muslim community to replace the old one. The mosque currently caters largely to Muslims from South Asia and Indonesia. Many of them live near Chungking Mansions, near the mosque. This helps to explain why the Kowloon Mosque is such a significant cultural place for non-Chinese Muslims in Hong Kong. In addition to the Mosque, the garrisons built a vast concrete pool to store water for worshippers to produce “Wudhu,” and water plants and enormous gold fish were placed inside the pool to prevent contamination. The Maulvi and Mussafir Khana were also given quarters (Rest House for wayfarers). The Muslim garrisons also brought their own Maulvi from Pakistan’s Campbellpur (Attock).

The institution is only open to Muslims; non-Muslims are not able to access. The mosque’s traditional Muslim architecture, which is ornate and ornate, contrasts with the modern architecture of the neighboring buildings. The four 11-meter-high minarets that mark the corners of the top terrace, as well as the widespread use of white marble on both the paving and the facade, are the building’s most notable elements. The main prayer hall, located on the first floor, has a capacity of 1000 people. On the second floor, a smaller women’s prayer hall is surrounded by a patio. A dome with a diameter of 5 meters and a height of 9 meters crowns the top hall. In January 1980, the old Mosque was dismantled, and building on the new Mosque began on March 6, 1981. On Friday, May 11, 1984, the new Mosque was constructed at a cost of HK$25 million and inaugurated for daily prayers. It has a capacity of 3,500 worshippers. The Mosque holds daily prayers five times a day, and big crowds gather on Fridays and Eidain. During Ramadan, Travih prayers are done every day, and Iftar is prepared for around 2,000-2,500 people. Every year, about a million people visit the centre. Since 2001, the Imam and Khateeb of this Masjid has been Mufti Muhammad Arshad (M.A. in Islamic studies), the Chief Imam of Hong Kong. He also teaches an Arabic language course at the mosque and preaches on Fridays in Urdu, English, and Arabic. He is also in charge of issuing fatwas and Quranic Maktabs. He also works as a lecturer at Hong Kong Baptist University. In 2009, he was named one of the 500 most powerful Muslim leaders in the world. The dome and the structural frame are made of reinforced concrete. Marble was used extensively, both for pavements and for the carved window screens that were created in China. Outside the mosque is a huge bus stop offering buses to numerous locations in Kowloon, the New Territories, and Hong Kong International Airport. The name of this stop is either Kowloon Mosque or Kowloon Park (which is adjacent to the mosque).