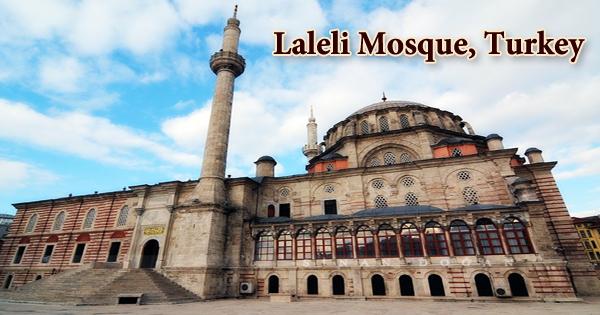 A Visit To A Historical Place/Building (Laleli Mosque, Turkey)

The Laleli Mosque (Turkish: Laleli Camii, or Tulip Mosque) is a baroque-style Imperial mosque constructed between 1759 and 1763 on Sultan Mustafa III’s order. It is an Ottoman imperial mosque built in the 18th century in Laleli, Fatih, Istanbul, Turkey. In Turkish, the word “Lale” means “tulip.” The name Laleli is thought to refer to either a local saint named Laleli Baba, whose tomb stood near the mosque until the mid-1950s or the Laleli Fountain, which is mentioned in 18th-century sources. A fire destroyed the complex shortly after it was completed in 1783, but it was soon restored. The madrasah was destroyed by fire in 1911, and subsequent road-building work destroyed many of the mosque’s auxiliary buildings. The mosque has lovely stained-glass windows, and its lovely street-level sebil (kiosk that once dispensed water or şerbet, or sherbet) is now home to a shop selling olive-oil items. The building’s construction started in 1760/1173 and finished in 1764/1177 AH, according to primary sources. It is Istanbul’s final royal complex, and it follows the Ottoman baroque convention formed at the Nuruosmaniye Complex a decade before. Most scholars credit Mehmed Tahir Aga with designing the monument, while some have speculated that head-architect Haci Ahmed Aga played a role as well. A mosque (cami), a madrasa (medrese), a soup kitchen (imaret), a fountain (çesme), sabil, tombs (türbe), a room for the mosque’s timekeeper (muvakkithane), accommodation for the imam and muezzin, a caravanserai (han), and stores constructed as an endowment for the religious foundation make up the complex. With twenty-four windows in the dome, five windows in the main semi-domes, and three in each of the small semi-domes, the interior of the prayer hall is well-lit.

Mehmed Tahir Aga was the mosque’s architect. The mosque has two doors and an entry door to its courtyard, both of which are built in a baroque style. The site of the mosque’s long-demolished hammam, which faces the road, is now occupied by shops. Near the mosque are the tomb of Mustafa Ill and the grave of his uncle, Selim Ill. The mosque was built on a high terrace atop a complex of vaulted shops whose rents were intended to help fund the mosque’s construction. A great hall lies underneath the mosque’s structure, backed by eight massive pillars and featuring a fountain in the middle. The mosque and soup kitchen are housed within a rectangular walled-in precinct elevated significantly above street level on a tall basement. The precinct is accessed through two main gates on the two southern corners of Ordu Street. Both gates are vaulted and lead up to the precinct level via ramps. The mosque is located diagonally inside the precinct, its qibla wall facing the southeast gate. The soup kitchen is situated to the northwest of the house. The mosque is aligned northwest-southeast and has a rectangular courtyard to the northwest that is roughly twice the size of the prayer hall. This courtyard features an arcade with eighteen domed bays and a central ablution fountain. The mosque’s foundation is made of brick and masonry, with a masonry superstructure and an octagonal drum supporting the dome. The courtyard entrances are flanked by two minarets, one on either end of the portico. In 1766/1179 AH, an earthquake destroyed the Laleli Complex, which was rebuilt in 1783/1197 AH. In 1911, a fire swept through the area, destroying the madrasa on a side street to the east of the complex. In 1918, the madrasa and the 18th-century residential community were demolished, and the area was developed according to a newly created orthogonal street pattern. The Laleli Mosque is shaped like an octagon inside a rectangle, with a gallery on the western end. Colorful variegated marbles in red, blue, yellow, and browns are used for the walls, which are further embellished with medallions in opus sectile made of semi-precious onyx and jaspers. Similarly, the mihrab and mimbar are lavishly adorned with precious marbles. The interior is brightly lit, with a variety of white and stained-glass windows. The dome of the Laleli mosque is 12.50 meters in diameter and 24.50 meters in height, roughly half the size and height of Nuruosmaniye’s dome. It’s borne on an octagonal drum made up of eight arches, with semi-domes attached to the corner arches and larger semi-domes linking the arches above the mihrab and the narthex’s central bay. With the exception of the two in the narthex, the dome arches are carried by eight columns that are engaged with the side walls. Angular squinches provide a transition from the square plan to the octagonal crown at the corners. Most of the Laleli Mosque kulliye’s buildings have vanished over time, but the octagonal domed türbe facing Ordu Street still stands, housing the graves of Mustafa III, his wife Mihrisah Sultan, son Selim III, and daughters Hibetullah and Fatma Sultan, as well as Mihrimah Sultan. The upper walls are encircled by a band of calligraphy, and the interior is painted with znik tiles. At ground level, there are casement windows that open into the side arcades, and a tier of arched windows above that is topped by circular windows below the dome arches. With the exception of the casements, all windows are made up of a mix of white and colored glass. The complex’s waqf (endowment) also included a number of buildings in the area, which provided income for the mosque and its külliye’s upkeep. Two caravanserais, the neighboring Taş Han (formerly known as the ukurçeşme Han) and the larger Büyük Yeni Han located in the commercial district north of the Grand Bazaar, were among the notable inclusions.