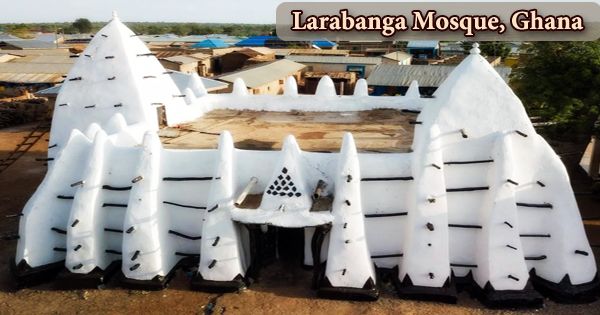 The Larabanga Mosque is a mosque in Larabanga, Ghana, designed in the Sudanese architectural style. Larabanga is Ghana’s oldest mosque and one of the country’s most venerated religious landmarks, constructed mostly of packed earth. The use of horizontal timber, pyramidal towers, buttresses, and triangular perforations over entry portals impacted the style of the seventeenth-century construction, which was greatly influenced by western Sudanese architecture. Because of its rich historical and architectural characteristics, it is commonly referred to as the “Mecca of West Africa.” The mosque is roughly 8 meters by 8 meters in size. The World Monuments Fund (WMF) named the Larabanga Mosque to its list of 100 Most Endangered Sites. The restoration operation has resurrected adobe maintenance knowledge. The mosque houses an antique Quran, which locals believe was handed to Yidan Barimah Bramah, the Imam at the time, as a gift from heaven in 1650 as a consequence of his prayers. The mosque, which was constructed using a West African adobe, includes two large pyramidal towers, one for the mihrab, which faces Mecca and forms the east facade, and the other as a minaret in the northeast corner. Twelve bulbous-shaped structures that are equipped with timber parts buttress these. It is one of just eight mosques built in this style in Ghana and has long served as a pilgrimage place for the country’s Muslim community. There is some disagreement about when the mosque was built and who built it. The mosque is believed to have been built in 1421. The mosque is thought to have been built by an Islamic trader named Ayuba who was passing through the area. Ayuba reportedly slept in the region and had a dream in which he was told to build a mosque, according to one account. The foundation of the mosque had suddenly emerged when he awoke the next morning, so he continued with the construction until the mosque was completed. The mosque lies in the Islamic town of Larabanga, close to Damongo in Ghana’s Savannah Region’s West Gonja District. The settlement is roughly 15 kilometers north of Damongo and 4 kilometers south of the entrance to the Mole National Park. The majority of villages in Northern Ghana, particularly in the Northern Region, are Muslim. Islam, which originally arrived in Africa through Egypt in the 10th century AD, spread from there to the west and south, paralleling the trans-Saharan slave and gold trade routes. Mande warriors, Islamic traders, and missionaries all exploited these trading routes in Ghana. These routes were occasionally characterized by assaults by the Almoravids, a Berber dynasty that was instrumental in the spread of Islam in the region. People were converted to Islam during rest stops for Islamic traders along the routes and in conquered lands, resulting in the construction of mosques in Ghana’s northern region. Some of these mosques, which date back to the 17th century AD, still exist today.

Larabanga Mosque, like other mosques in Ghana’s Northern and Savannah Regions, is constructed utilizing local materials and construction techniques in the traditional Sudanic-Sahelian architectural style. The Sudanese-style mosque is composed of mud and sticks and is around 8 meters (26 ft) by 8 meters (26 ft). A big baobab tree stands near the entryway, beneath which Ayuba’s remains are buried. There are four entrances to the mosque: one for the village leader, one for men, one for women, and one for the muezzin who leads the call to prayer. The mosque has a very old Koran that is said to have been delivered from heaven to an Imam named Bramah in the year 1650 after he pleaded fervently for a Quran. It contains two pyramidal towers, one for the mihrab, which faces Mecca and forms the east front, and the other for a minaret in the northeast corner. Additionally, horizontally oriented timber pieces reinforce 12 conical buttresses on the external walls. The architectural style is also known as “flat-footed adobe architecture.” The old mosques, in addition to serving as Friday prayer grounds, are important places of pilgrimage for the country’s Muslim community. On busy days, a large number of devout worshippers flock to these mosques for prayers and Quranic readings. Individuals who have important problems to tackle or who seek spiritual protection on their businesses can also request private readings. The Chief Imam usually asks for the sacrifice of a cow and other community gifts in exchange for the readings. All the structures are given a whitewash. Larabanga Mosque, like other mosques in Ghana’s Northern Region, is constructed utilizing local materials and construction techniques in the traditional Sudanic-Sahelian architectural style. The World Monuments Fund included it to the 2002 World Monuments Watch list in 2002 due to damage caused by an unsuitable repair in the 1970s. One of the minarets also toppled in a storm in 2000, according to the Fund. Through the World Monuments Fund, the financial services corporation American Express contributed $50,000 to the restoration of the mosque. The monies were used to examine the site’s state of disrepair and to support a team of local artists and laborers to restore the monument, with a focus on resurrecting mud-plaster maintenance knowledge. Larabanga’s unique architecture and craftsmanship attract visitors, and the adoption of ancient building techniques has reignited interest in mosque construction artisanship. Community members were hired to do the conservation work, resulting in a newly trained local workforce and a building that is more historically and environmentally appropriate. Local locals have taken on more responsibility for the site’s upkeep and have pledged to create a community center to accommodate the growing number of tourists and religious pilgrims.