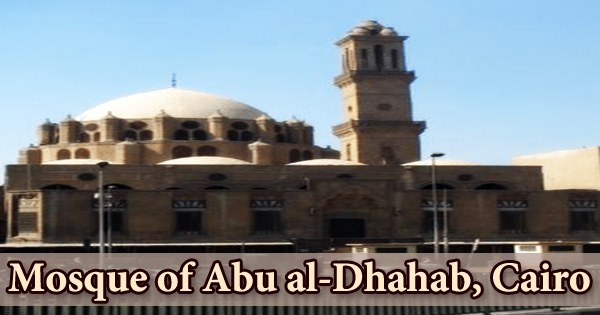 A visit to a historical place/building (Mosque of Abu al-Dhahab, Cairo)

The Mosque of Abu al-Dhahab (Arabic: مسجد أبو الذهب‎) was built in 1774 by Muhammad Bey Abu al-Dhahab, who sought to revive the Mamluk dynasty in Egypt between 1771 and 1772 with his master ‘Ali Bey al-Kabir. It is a mosque built in the 18th century in Cairo, Egypt, near to the Al-Azhar Mosque. It’s an important piece of Egyptian-Ottoman architecture. It is situated between the Mamluk complex of al-Ghuri and the Fatimid Mosque of al-Azhar, in a prominent site. All that remains of a vast religious complex that featured a library, latrines, and fountains is the mosque and a two-story takiyya on its south side. Amir Ali Beh Al Kabir appointed Mohamed Abu El Dahab as the commander of the Egyptian army that traveled to capture Syria in 1771. He was successful in his campaign, taking control of a number of towns in Syria and the surrounding area. Mohamed Abu El Dahab, on the other hand, was unfaithful to his master, Amir Ali Beh Al Kabir, and assassinated him in 1774, becoming Egypt’s sole king until his death in Aka in 1775. His remains was laid to rest in the mosque’s mausoleum. The mosque was part of a larger religious-charitable complex that included a madrasa, a library, a takiya (a khanqah or Sufi complex), a sabil (water dispensary), a hod (water trough), and latrines, making it one of the last major architectural complexes of its kind built by the Mamluk beys of Egypt. The mosque’s waqf featured a considerable amount of money set aside for education. Despite the fact that this mosque was constructed after the ambitious Abu al-Dhahab had abandoned his master’s machinations and returned to recognizing the Ottoman sultan’s suzerainty, it shows prominent Mamluk characteristics incorporated into an Ottoman scheme. It resembles the Ottoman Mosque of Sinan Pasha in Bulaq, which it imitates in terms of spatial organization, dome size, and profile. The mosque is located in the middle of Medieval Cairo, near to the Al-Azhar Mosque. It is architecturally extremely similar to the previous Mosque of Sinan Pasha and is a prominent example of indigenous Ottoman architecture in the city, although having many Mamluk influences. The mosque is the fourth mosque in Cairo to be constructed in the Ottoman style of construction. The first was Suleiman Pasha’s Mosque in the Citadel, which was completed in 1528. The second was the Sinan Pasha Mosque in Boulaq, and the third was the Queen Safeya Mosque in Al Dawedeya. The Abu El Dahab Mosque and the Sinan Pasha Mosque share numerous architectural features.

The dome’s zone of transition, which employs a tripartite squinch reminiscent of al-Qubba al-Fadawiyya, attributed to Qaytbay (1479), is one of the Mamluk features. The absorption of the founder’s tomb within the mosque, a Mamluk heritage seen for the first time in a Cairene Ottoman structure; the dedication of the mosque, like Sultan Hasan’s, as a madrasa for the four rituals of Islamic law, with the absence of the Sufi services typical in late Mamluk mosques. The mosque’s layout is similar to that of other Ottoman mosques, with a rectangular prayer hall topped by a high dome and flanked on three sides (save the eastern qibla side) by a portico with smaller domes. The square minaret, which is practically a reproduction of that at the neighboring complex of al-Ghuri, and the traditional facade paneling with muqarnas niches enclosing windows. Unlike the Mosque of Sinan Pasha, whose porticos overlook gardens on the Bulaq port, this mosque is located in the heart of the city and is built on top of stores, as is customary in commercial areas, to generate revenue for the mosque’s upkeep. Unlike the Mosque of Sinan Pasha, whose porticos look out into gardens on the harbor of Bulaq, the mosque of Abu Dahab is located in the heart of the city and is built on top of businesses that provide revenue for the mosque’s care. The mosque is built in the shape of a rectangle, measuring 33 meters from south to north and 24 meters from east to west. The mosque’s praying area is encircled by Rewaqs, which is the Arabic term for the space between two opposing pillars. Small domes cover these Rewaqs, which are surrounded by plant embellishments. The mosque’s minaret appears to have been inspired by the nearby al-Ghuri complex’s original minaret, which featured a triple lantern peak (from the early 16th century). The mosque’s main dome, which is a semi-square, is located over the praying space. Each side of this square is 15 meters long, with two brass windows coated with alabaster on each side. Many various stores, mostly selling books, are located beneath the mosque on both the eastern and northern sides. A set of colored alabaster stairs went to the mosque’s gate on the northern side, while another set of circular stairs led to the mosque’s eastern gate. Although the mosque’s doors remained the same, these two sets of steps were replaced. Because it was aligned with the ancient roadway, the outside façade wall beyond the portico also forms an additional enclosure around the mosque, which is inclined at a slightly different direction than the mosque itself. The mosque’s mihrab is decorated in the Mamluk style with inlaid mother-of-pearl and marble. Muhammad Bey Abu al-grave Dhahab is under one of the lesser domes in the mosque’s portico, on the northeast corner. A brass room beside the Minbar houses the tombs of the mosque’s builder, Mohamed Beh Abu El Dahab, and his daughter, Zelikha Hanem. The mosque’s minaret is enormous, and it resembles the minaret of Qonswa Al Ghuri mosque. Except for the Ottoman mosques, which were known for their thin pen-shaped minarets, they both had Egyptian-style architecture. The mosque of Abu El Dahab has a tall minaret with three stories and five stone heads at the top. The ruins of a two-story edifice that served as the takiya (Sufi lodge) may be found on the mosque’s south side.