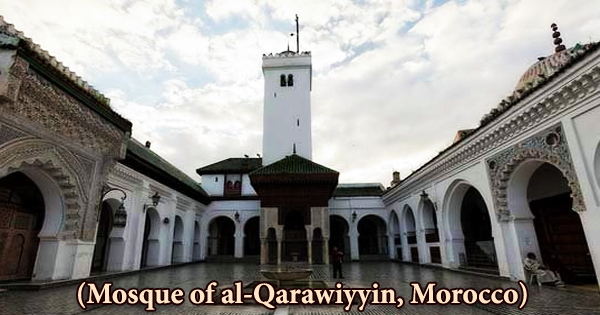 A visit to a historical place/building (Mosque of al-Qarawiyyin, Morocco)

The Mosque of al-Qarawiyyin, located near the Suq al-‘Attarin, or Fez al-Bali Spice Market, is one of the world’s oldest colleges and one of the biggest mosques in Fez, Morocco; it is also known as Al-Karaouine or Al Quaraouiyine. Fatima al-Fahri, the daughter of a wealthy Qayrawani immigrant, founded the mosque as a private oratory in 857/242 AH, and it became the congregational mosque of the neighborhood of al-Qarawiyyin in the tenth century. In 1963, it became part of Morocco’s modern state university system, and two years later, it was renamed “University of Al Quaraouiyine.” The mosque itself is a notable complex of historical Moroccan and Islamic architecture that incorporates features from many periods of Moroccan history. The madrasas surround the mosque, which served as a significant intellectual center in the medieval Mediterranean. If, as legend has it, Gerbert of Auvergne (930-1003), who would later become Pope Sylvester II and is credited with bringing the use of zero and Arabic numbers to Europe, was once a student at al-Qarawiyyin, its famous intellectual reputation may have crossed religious boundaries. Scholars believe the Qarawiyyin functioned as a madrasa until the end of World War II. Many academics separate this status from that of “university,” which they regard as a distinctively European creation (similar to how Christian seminaries are not regarded as universities). They trace the conversion of al-madrasa Qarawiyyin’s into a university back to its contemporary restructuring in 1963. However, other sources, such as UNESCO and Guinness World Records, claim that the Qarawiyyin is the world’s oldest university or continuously running higher learning institution. Fez was politically, economically, and culturally intertwined with Islamic Spain, notably following Ferdinand and Isabel’s expulsion of Muslims and Jews from the Iberian Peninsula in 1492/897 AH, which resulted in an inflow of refugees into the city. The hypostyle plan of the mosque, the 10th century square stone minaret (commissioned and funded by ‘Abd al-Rahman III, the first Umayyad caliph of al-Andalus), and the carved stucco, wood, and glazed tile (zilij) ornamental style derived from the Alhambra are all visual references to Islamic Spain’s religious and palatine architecture.

The T-shaped layout produced by a raised central aisle perpendicular to an aisle fronting the qibla wall at al-Qarawiyyin, on the other hand, is a North African mosque tradition. The mosque’s construction and adornment are mostly made of stuccoed brick with stone and tile revetment, as well as carved cedarwood. Despite this, it is unknown when the Qarawiyyin Mosque began to operate more formally as an educational institution, owing to the scarcity of historical documents from the time period. The most important historical texts, such as Ibn Abi Zar’s Rawd al-Qirtas and Abu al-Hasan Ali al-Zahrat Jazna’i’s al-As, do not provide any clear details on the history of teaching at the mosque, though al-Jazna’i (who lived in the 14th century) mentions that teaching had occurred there before his time. Otherwise, halaqat (circles) for studying and teaching may not have been mentioned till the 10th or 12th centuries. Between 1134 and 1143, the Almoravid monarch Sultan ‘Ali ben Yusuf built the mosque to its current size. The Sa’did Sultan ‘Abdallah ibn al-Shaikh (r. 1606-1623/1014-1032 AH) built the courtyard’s blue and white tile floor, marble ablutions fountain, and two fountain pavilions, which resemble the Court of the Lions at the Alhambra. The Qarawiyyin Mosque was built in the 9th century, but its current appearance is the product of a more than 1,000-year historical development. The current mosque occupies a half-hectare plot of land. It is made up of a huge hypostyle interior area for prayers (the prayer hall), a courtyard with fountains (the sahn), a minaret at the western end of the courtyard, and a number of annexes surrounding the mosque itself. According to a significant modern study of the mosque’s structure released in 1968 by French archeologist and historian Henri Terrasse, remnants of the ancient mosque may be seen in the current building’s plan. The mosque’s first incarnation occupied a wide space to the south of the current courtyard (sahn), in what is now the prayer hall. It consisted of a prayer hall with four transverse aisles running roughly east–west, parallel to the southern qibla wall, and had a rectangular floor plan of 36 by 32 metres, covering an area of 1520 square metres. It most likely also had a tiny courtyard, and the original minaret, which was similarly modest, is said to have stood where the wooden anaza (at the central entrance to the prayer hall from the courtyard) currently stands. The mosque’s minbar (pulpit) sits to the right of the mihrab, and it may be housed in a tiny chamber behind a door in the qibla wall here. A well dug within the mosque’s precinct initially provided water for the mosque. In the twentieth century, there were two attempts to restore the site. Aziza Chaouni finished the first in 2007 and the second ten years later. Many of the mosque’s principal entrances were given wood doors with intricate bronze fittings, which are among the earliest surviving bronze artworks in Moroccan/Andalusian architecture today. Apart from the central nave’s decorations, the remainder of the mosque is architecturally similar, but the floor plan has a few minor anomalies. The courtyard (sahn) is rectangular, bordered on three sides by the prayer hall and on the north by a gallery. The floor is covered in traditional Moroccan mosaic tiles (zellij), and there is a fountain in the center. Two elaborate Saadian pavilions exist at the courtyard’s western and eastern sides, each housing a fountain. The medieval library of the mosque and university is also located behind the mosque’s southern wall but to the east of the mihrab axis. It is frequently said to as the world’s oldest library that is still open today.