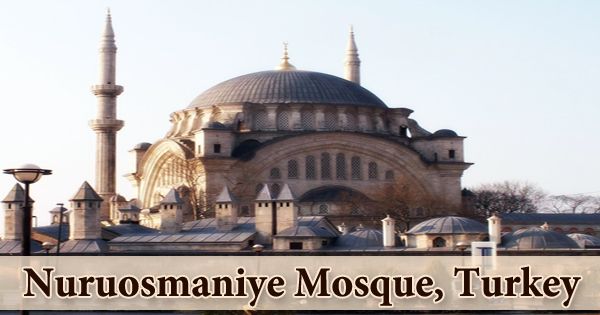 A Visit To A Historical Place/Building (Nuruosmaniye Mosque, Turkey)

The Nuruosmaniye Mosque (Turkish: Nuruosmaniye Camii) is a traditional Baroque and Rococo style mosque, which was a common style of architecture in the Ottoman Empire during the 1700s. The mosque is an Ottoman mosque built in the 18th century in Istanbul’s emberlitaş neighborhood of Fatih district. It was added to Turkey’s Tentative List of World Heritage Sites in 2016. Simeon and Mustafa Aga, a Greek minority architect, designed the mosque on one of Istanbul’s seven hills. The mosque’s dome is highly distinctive, and it is the fourth largest in Istanbul, after the Hagia Sophia, Süleymaniye Mosque, and Fatih Mosque. According to historical documents, the grounds once housed a small mosque. The land was bought, and existing structures were demolished to make way for the new complex. Mustafa Aa and Simeon Kalfa, a non-Muslim Greek master, were the architects. Mahmud I ordered the construction of the Nuruosmaniye Mosque in 1749. However, his untimely death meant that his younger brother, Osman III, would be in charge of finishing the complex. The opening ceremony took place in December 1755, seven years after the project started. It was called Nuruosmaniye Mosque, which means “The Light of Osman,” after Osman III, but also because of the mosque’s many windows, which allow a lot of light into the space. The Nuruosmaniye mosque is part of a larger religious complex known as the Külliye, which serves as a community center for culture, worship, and education. Nuruosmaniye Mosque was designed in the Ottoman Baroque style and was the first imperial mosque in Istanbul to combine both Baroque and Neoclassical elements in its architecture. A madrasa (religious school), an imaret (soup kitchen), a library, a tomb, and a marble public water fountain are all part of the mosque complex. Another dozen room were found underneath the mosque during recent renovation work.

The mosque has strong echoes of Aya Sofya, especially the lofty dome, colonnaded mezzanine galleries, wide band of calligraphy around the interior (in this case a marble relief of the Sura Al-Fath), and 174 windows topped with Roman arches, despite being built in the then fashionable and modern baroque style. It is surprisingly calm and contemplative inside, despite its prominent location on the busy pedestrian route from Caalolu Meydan and Nuruosmaniye Caddesi to the bazaar. The mosque has a semi-circular courtyard with no ablutions fountain today, just taps. Each of the two minarets has two balconies. Within the prayer hall, it has a single dome and no columns, but it is raised on four wide arches with a diameter of 25 meters (82 feet) and a height of 43 meters (141 feet). On the main walls, there are many ornaments, including a stone crescent on the minaret tops, stone work on the niche (Mihrab), and stone work on the pulpit (Minbar). The dome is 26 meters in diameter and has 32 windows across it. On the dome the verse from the Quran says:

“Allah is the light of the heavens and the earth. The example of His light is like a niche within which is a lamp, the lamp is within the glass, the glass as if it were a pearly white star lit from the oil of a blessed olive tree, neither of the east nor of the west, whose oil would almost glow even if untouched by fire. Light upon light. Allah guide to His light whom he wills. Allah presents examples of the people, and Allah is Knowing of all things.”

The sultan’s lodge, which has latticework between its columns and is accessible through a ramp outside the mosque, is situated on the east corner of the prayer hall. The existence of many windows provides lots of light but also justifying the name of the mosque: Nuruosmaniye means “The Light of Osman.” It also gave the neighborhood its name. The muqarnas and curved courtyard of the mosque are examples of Baroque influence. The mosque is situated on Istanbul’s second hill, on the site of Fatma Huton’s mosque, which was destroyed by fire. A square-shaped tomb with a dome stands between the library and the Royal Pavilion. It was primarily constructed as a burial site for Shehsuvar Sultan, Osman III’s mother. Over time, other members of the royal family were buried here as well. A broad manuscript library is also located within the complex. Sultan Mahmud I (reigned from 1730 to 1754), also known as the Hunchback, ordered and financed its construction. His brother, Sultan Osman III, who succeeded him to the throne, completed the project during his brief rule. It was assigned the name Nur-u Osmanh, which means “divine light of the Ottomans,” when it first opened. The brothers were both buried near the New Mosque and Spice Bazaar in Valide Sultan’s Tomb. The east and west gates are located on opposite sides of the mosque. The fountain is also situated at the western gate (sebil). Both gates open into the Grand Bazaar, enabling traffic to flow freely.